The Next Round Of Resets

Back in 2004-2007 a tremendous share of the mortgages purchased during the height of the real estate bubble were 3 year adjustable rate subprime mortgages.

I remember tracking charts back then and imagining how the world would change as the rates reset higher.  Everyone knows how the story ended.  Homeowners could not afford the mortgages at the higher rates, they could not refinance because they were upside down, and the destruction of the subprime market brought the credit crisis during the fall of 2008.

Today we have a new chart.  This one is far more sad because it deals with human lives.  (Someone who loses their home can just rent since we have an endless supply of housing, something our leaders have not yet put together)

The following highlights the peak point of job losses since our depression started in 2007.  These unemployed Americans are now about to become part of the "99ers", which means their 99 weeks of unemployment benefits will expire and they will no longer receive government support. 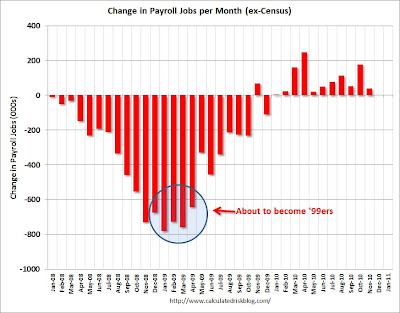 The current tax bill moving through Congress has no additional weeks of unemployment insurance, even though it extends the already ridiculous 99 weeks currently in place.

If the government decided to artificially support the mortgage market by providing or guaranteeing over 90% of new loans issued (which it currently is today), then they will certainly create a program to deal with this oncoming issue.

Otherwise there are going to be some very hungry people as we move forward.

This does not include the massive "off" balance sheet debt that will need to be financed.

Bernanke has already volunteered to pay for $900 billion of the $1.5 trillion with the printing press, and I fully expect him to pick up the rest of the tab during the second half of the year, especially with interest rates currently rising in the government debt markets. (He certainly does not want foreign investors to see the smoke)

This will take care of the current unemployment problem in America, until the checks coming in the mail for the 99ers or soon to be 299ers, have no value and cannot purchase goods at the store.

Or we could cut some of the other absolutely ridiculous government waste and spending now.  But that is too silly to talk about today, it is far more exciting to wait for a currency crisis and food shortages before cutting a government worker's pay from $175,000 down to.....$135,000?