While the developing economies around the world base their economic growth on savings and production, the American economy for decades has been based on borrowing and spending.

The key determinant to this ponzi scheme is the so called "wealth effect," which means that if Americans feel good they will be more likely to go out and spend.

After a massive rally in the stock market this year combined with an equally massive media campaign that the economic trouble is behind us, Americans went out this holiday season and spent a tremendous amount of money they should have been saving.

The wealth effect is improved in a more psychological fashion with a rising stock market, but is given larger substance with the increase in real estate prices because real estate makes up a far larger portion of the average Americans percentage of assets.  (The vast majority of stocks are held by the wealthy top 10 percent, and even more so by the top 1 percent)

For this reason, I find it fascinating that the current double dip in housing prices is receiving far less attention from market analysts in determining their 2011 forecast.

Case Shiller released their home price index this morning for the month of October. (An average of August, September, and October pricing)

The data showed the fourth consecutive month of falling prices, and a non-seasonally adjusted month over month drop of -1.32%. 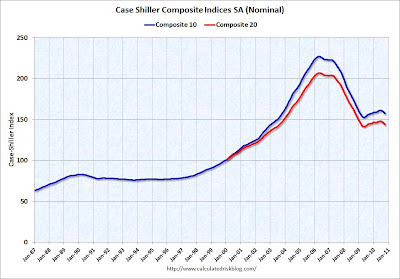 Many cities have now fallen to new lows from the peak in 2006 - 2007 (cities that saw an artificial bounce from the home buyer tax credit last spring) such as Atlanta, Charlotte, Miami, Portland, Seattle, and Tampa.  The rest of the cities will be joining them shortly.

These price declines come in the face of all time record low mortgage rates (which have just begun to rise) and a foreclosure moratorium which kept many additional homes off the market (which are now slowly being put back on.)

Let's hope everyone that believed the media that the housing market bottomed and spent an enormous amount of money this holiday shopping season, will brush off the coming loss in home equity as part of their "wealth effect" mindset.

Look for major trouble coming in 2011.