Which brings us to where we find ourselves today.

The IMF (International Monetary Fund which is a global central bank), the EU (European Union), and the ECB (European Central Bank) have been put in charge of stopping a financial contagion and “bailing out” all countries as we move forward.

The first “problem” facing the European financial markets in 2011 will be the Ireland elections in January and the possibility that new political figures will reject the bail out package the IMF presented to Ireland last quarter. (The Irish people have been given massive tax increases and government workers have received massive pay reductions in order to ensure their banks receive no pain for the mistakes they made. This has already led to rioting and civil unrest)

If the Eurozone survives these two bail outs then the contagion will move to Italy, Belgium, and then France. 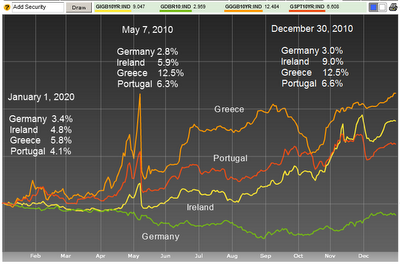 The banks of all European countries hold an enormous amount of sovereign debt. If a country were to fail, it would be like setting off a landmine in a field of landmines. A bank would fail due to the massive losses incurred, which would subsequently create losses for another member bank, and the chain of explosions would continue.

This is known as contagion, and it is was what we witnessed during the fall of 2008 when Lehman brothers failed. In order to stop the contagion our government and central bank had to pay, insure, or guarantee a total of $22 trillion in debt, as well as change accounting laws in order to calm the markets.

The bankruptcy of a European country would be the equivalent of a Lehman brothers failure, due to the nature of interconnected banks around the world.

The EU has created a bail out structure that does not even cover the current cost to bail out Spain. My guess is that when push comes to shove, the ECB will step in and physically print the money needed to ensure the markets that no failure will take place. 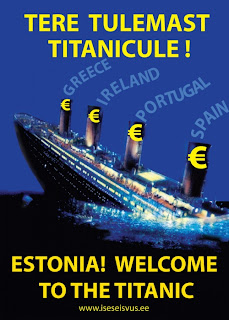 The only stop to this inflationary outcome can come from the political will of member nations. (As the rioting grows, a member government may actually stand up for its people)

People assume that Germany would instantly object to this inflationary move because it would hurt the global standing of the euro currency. However, the German economy is based on exports and their political leaders can “talk” about their disgust at the anti-currency decisions yet at the same time enjoy a boost to internal industry.

(This of course makes no sense when looked at with fundamental Austrian economic analysis. The scope of that topic is beyond this current discussion. My focus here is to discuss what “will” happen, not what “should” happen. For an excellent guide to basic economy understanding please read: How An Economy Grows And Why It Crashes, by Peter Schiff)

In addition to the European Union imploding from within, the United Kingdom, Japan, and the United States all face a coming sovereign debt crisis.

As discussed during the introduction, it is not a matter of if, but when, for these developed nations. My opinion is that either the UK or Japan will experience a run on their debt first and the United States will be the last.

The United States will be the grand finale to the global sovereign debt crisis, and its slow move toward complete destruction will come in stages. We will now discuss how the 2011 version of the US debt crisis will unfold.