However, some market participants (me) looked at the ADP report with some skepticism.  Another piece of economic data released today was the ISM Services Employment Index.  The following chart shows how these two pieces of economic data have tracked each other essentially tick for tick over the last decade.

The ADP Employment data surged, while the ISM employment index fell significantly creating the separation shown below.  This has me concerned on the reliability of the ADP data. 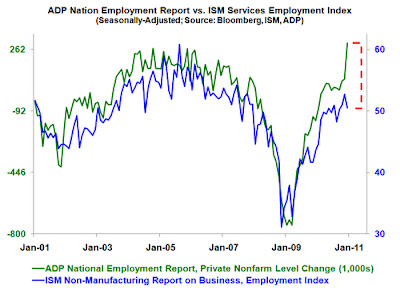 It appears nothing will stop the stock market freight train, until something does.  Then look out below.