I have said for years that the Federal Reserve would unleash an inflationary holocaust in the attempt to purchase all the toxic debt from our banks and federal government, which they have continued to do now for over 2 full years.

The world has finally begun to feel the effects of the Fed's quest to keep banker bonuses above an average of $450,000 per year, which they have continued to do now for over 2 full years.

The inflation has first been exported to foreign countries that peg their currency to ours.  As our dollars flood onto their shores, their central banks must print their own currency in order to keep a stable exchange rate. 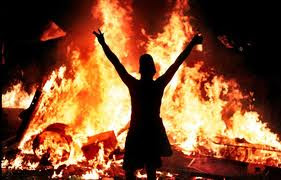 This has caused food prices to skyrocket around the world leading to the starvation and rioting that you have seen and heard about on the news over the past few weeks.

The most recent revolution comes from Egypt, where citizens have taken to the streets by the millions in protest of inflation and surging unemployment.

Please understand that eventually these countries will be forced to exit their ridiculous peg to our currency.  At that point the built up dollars that are being temporarily stored overseas will come flooding back onto our shores.

You will see the cost of living in America begin to rise at a meteoric rate, and the rioting you can watch on the stream above will be taking place outside your window.

Bernanke's focus is to ensure that the investment banker employee bonuses stay as close to 7 figures annually as possible.  My hope is that as our country moves into hyperinflation that these investment bank employees use their funds to help feed the starving children in our country.

For some reason, I don't think they will.  And you will see anger in America that you never thought was possible as the people realize how the Genocidal man running our Federal Reserve ruined our nation.

Gold and Silver are currently surging as the market sells off.