Paul Volcker resigned from the Obama administration today as another member of the staff abandoning the Titanic before it sinks into oblivion. 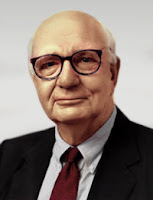 Volcker was our Federal Reserve chairman from 1979 to 1987.  When the history books are written years from now he will go down as an American hero.

He stepped in during the late 1970's in a period of high inflation and low economic growth (stagflation).  While every politician and member of the business community begged for him to lower interest rates, he raised them non-stop up to 18% to crush the back of inflation.

He put the economy into recession with the high interest rates and cleansed the system of the current mal-investments in place.  Real estate prices fell, stocks fell, companies went out of business, and politicians were not re-elected.

With the bad debt cleansed, inflation under control, and our currency strong, it set the stage for the greatest bull market and economic boom in modern history. (1982 - 2000)

Today we have the exact opposite situation under our current Federal Reserve chairman.  Our politicians and banks beg him for low interest rates and bail outs and he provides it at every opportunity.  He purchases the toxic debt from the banks, and he purchases unlimited amounts of government debt so politicians have an unlimited credit card. 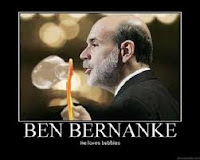 This is the equivalent to giving a heroin addict an increasing amount of heroin when they begin to sober up.  The party never stops, and the system is never allowed to cleanse.

Until the heroin addict dies from an overdose, which is on its way in the form of a currency crisis.

Volcker was the most hated man in America during the early 1980's, just like a parent who punishes their children for misbehaving.  Bernanke is the exact opposite.  He is beloved by Americans today for providing never ending stimulus and "saving" us from the depression.

However, as Milton Friedman once said, "There is no free lunch."

Thank you for your service, Mr. Volcker, I wish we had a courageous leader such as yourself running our Federal Reserve today.