The dollar index is a measure of six of the largest world currencies against the US dollar.  It weighs the euro as 57% of the total index, with the other five currencies (Canadian dollar, Swiss franc, British pound, Japanese yen, and Swedish krona composing the other 43%)

This makes the dollar index heavily influenced by the value of the euro, which as you know is currently crumbling under a sovereign debt crisis.

A far better tool to value our currency against the others around the world is the trade weighted dollar index which is composed of a much larger basket of currencies. (26 total)

This index has just hit a new all time record low, as can be seen by the graph below, and will be an important indicator to watch as our currency moves toward the coming crisis where it will enter free fall. 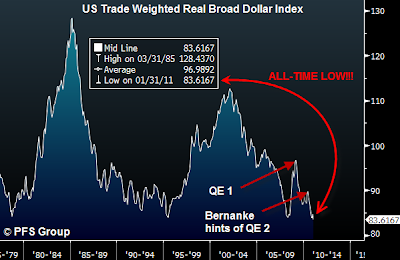