Oil And Our Future

In 2009 the price of oil collapsed following the financial crisis.  The cost of energy for Americans fell to $265 billion per year, which freed up an additional $200 billion in money to spend, save, or invest.  This was a tremendous boost to the economy.

This year, before the recent run up in oil prices, Americans were already back on track to spend $400 billion on energy needs.

The following chart shows the rise, fall, and rise again of oil prices: 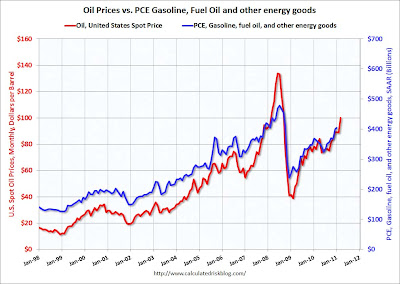 Our economy is far different than it was back in 2008 during the first run up.  Here are the 3 main reasons why we are far less prepared for an oil price shock:

1. The number of unemployed Americans is now 100% higher than 2008.  This does not factor in true unemployment, which I discussed on Friday.  A big portion of the job losses have come from the bursting of the real estate bubble in the form of construction workers, real estate agents, mortgage loan officers; all disappearing.

2. Real estate prices, the engine behind the artificial prosperity of the 2000's, have fallen 30% and appear to be making their next move down.  This eliminates the "ATM" effect for the American consumer who borrowed from their home and spent the money into the economy.

3. The stock market is down considerably from the early 2008 prices taking away another form of artificial wealth.

The following shows who owns the largest percentage of oil reserves around the world: 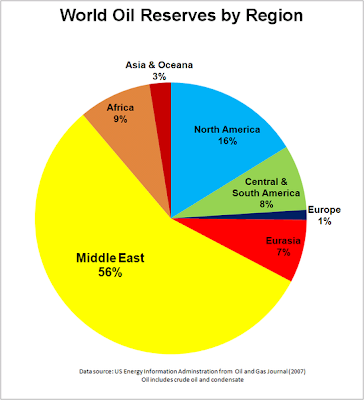 This chaos has increased the cost of gasoline by 21.85% over the past month. 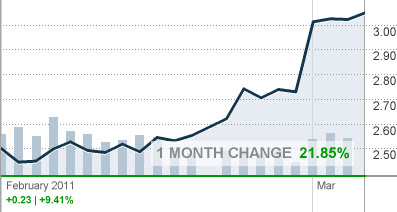 The cost of energy, should it continue to rise, has the ability to tip the economy back into recession as it did during 2008.

The key question is, what happens at that point?  Most market observers feel that money will move out of stocks and commodities and back into the traditional safe assets such as cash and treasury bonds.

But what if this time is different?

What if this time the world viewed treasury bonds as "less safe" than previously thought?

I do not think this coming fall will be differnent.  I believe money will move back into cash and treasuries during the next "risk off" episode.  I discussed what could cause this next leg down in Big Picture Outlook: Waves.

I believe we are likely to see one more deflationary fall, then reflation by central banks around the world.  However, the next boom/bust cycle, which could be a few years away, will be different.

During that period investors will run from treasury bonds and flee to hard assets.  Commodities.  We will be faced with a currency crisis.

This will most likely take 2-5 years to play out, and investors need to be vigilant and focused along the way during each deflation/reflation cycle.

In the mean time, I will continue to focus on why the final cycle will be different.  We'll discuss why investors will ultimately run from both treasuries and the dollar.  Investors need to prepare their portfolio for this event today, as it will change the landscape of the global financial world over the next century.