CoreLogic reported this morning that there are currently 1.8 million homes that are 90+ days delinquent, in foreclosure or bank owned that are being held off the market.  This is also known as the "shadow inventory." 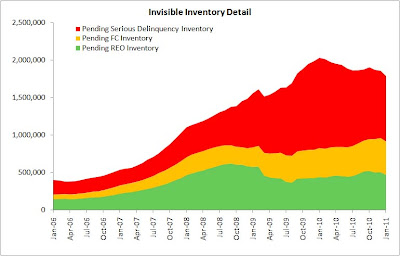 They anticipate that almost all these homes will end up in the shadown inventory, as once logic sets in, these homeowners will stop making their monthly payments.

LPS Mortgage Monitor reported earlier this week that the average number of days a home is delinquent before the bank takes possession is now up to 537 days.

That means the 2 million homeowners above, once they stop making payments, will live for free for an average of 1.5 years.

This artificial stimulus, along with the 99 weeks of unemployment benefits, is what keeps the IPads flying off the shelves.

The ultimate end game, when the shadow inventory finally enters the market, will be a further collapse in home prices, another round of massive losses on the big bank balance sheets (now the federal government), another round of massive losses on Fannie and Freddie (now the federal government), and a massive increase on our federal deficit to pay for it all.

The federal government is currently bankrupt and the federal deficit is paid for by the Federal Reserve's printing press.

The ponzi scheme ends with a collapse of the currency and the purchasing power being transfered to those holding precious metals, foreign currencies, and other commodities.

How long will it take?  Not sure.  Bernie Madoff was able to run his ponzi scheme for many years.  Then one day his investors woke up broke.