The discussion in the media currently, after all the heated debate over the $38 billion in spending cuts which turned out to be less than $1 billion when looked at closely, is whose budget plan will the US go with over the next decade; Obama or Paul Ryan?

Both men have their staff working non-stop to find imaginary cuts they will make in future spending.  As they were last week during the $38 billion comedy show, the America people are riveted.

If either men can accomplish their task and convince leaders to make the extremely "difficult" decisions ahead, then both plan's federal deficit growth over the next ten years will look like this: 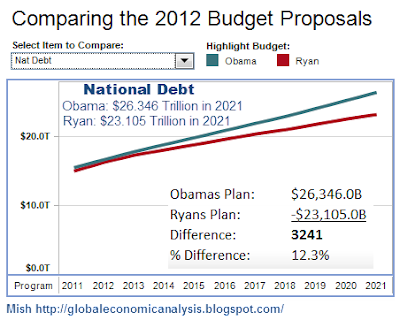 Paul Ryan's is better, but as you can see it does nothing to solve the problem.  Both deficits still continue to track upward at a rapid rate.

In addition, both sides project pie in the sky revenue growth through the decade as well as interest rates staying at close to 0%.  (They can't go below 0%)

In reality, our revenue is soon to collapse during the next leg down of our current depression, which began in December 2007, and the interest payments have no where to go but up, as our bond market is in the final stages of the largest bubble in history.

As Greece is proving today with their government debt approaching 20%, the market can be quite cruel when it turns on you.

When revenue plunges, and interest payments on the current $14 trillion we already owe surge, these pie in the sky projections will turn to pixie dust.

The truth is that both parties will never get close to the fantasy projections they are putting before us.  Spending will continue to surge as the economy continues to crumble because of coming "stimulus" programs to save us.

While the games are fun to watch and keep people distracted from what is really happening, the financial markets understand exactly what is taking place behind the curtain.

The dollar index has broken below 74.5 and is now tracking a straight line downward.

If the dollar index can break and hold below the all time low of 70, it may turn into a waterfall rout.  That is certainly a big if, as there are still tremendously deflationary forces looming in the shadows around the world.  Such as:

4. Japan's financing needs for the earthquake

6. The next wave down of the American housing and commercial real estate markets

7. Continued unrest in the Middle East

While just one of these events has the power to create tremors in the market, they are all happening simultaneously.  Bernanke continues to pump in his trillions of printed cash to try and offset these deflationary forces, but his ability to overcome the size and magnitude of the force is still in question.

I continue to believe that the best strategy is to hold strong positions already in place and continue to build cash to purchase during the next shock to the markets.