After a long week of theatrics that could rival any Broadway play our leaders have come forth with a budget in place allowing our government to continue running without a...(enter dramatic music)...shut down.  While there was never any danger of an agreement not being put into place, it allowed the media and American citizens who can't see the big picture a week of real excitement.

When looking at the big picture, or total pie, the theatrics this week become more of a comedy than a drama.

This can be clearly illustrated with the fantastic picture below: 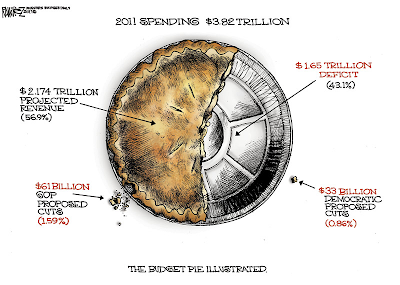 The portion that is the pie represents the annual revenue (taxes) our government takes in: $2.17 trillion.

The remaining empty portion of the pie tray represents the annual deficit: $1.65 trillion.

Can you see the size of these cuts in relation to the total deficit?  Imagine how long it would take them to put together a plan to make a real impact on our fiscal problem moving forward..

Our lenders (China and Japan) must have been watching this week's theatrics in horror.  Bill Gross, who manages the world's largest bond fund and just sold 100% of his treasury (government) bonds, was most likely doing the same.

The truth is that the difficult spending cuts will never come.  Our leaders will only make the adult changes when our currency begins to collapse and our bond market implodes.

At that point it will be far too late.  The time to prepare yourself for this coming disaster and financial crisis is right now.  I hope this week's drama was a clear sign to you as an investor that our political leaders have no intention of making the tough decisions needed for our country.