This morning we received the most important piece of economic data of the month which arrives on the first Friday: The Jobs Report.

There were a total of 244,000 new jobs created, with the unemployment number ticking up to 9%.

As we like to do here, we will take a slightly closer look at what is behind this number.

Last month McDonald's held a national hiring event.  They took in 62,000 new employees in the month of April. (Side note: Over 1 million Americans showed up to apply for the 62,000 positions)

In addition to this major boost to the jobs number we have the magical birth/death model.  The government makes up a number every month on the assumption that a certain number of new businesses are being created and hiring employees.  Their magical addition to this months report: 175,000 jobs.

So if we take away the one time McDonald's hiring and the imaginary birth/death model jobs, we have a total of 7,000 new jobs created.

Now we can move on to the unemployment rate.  As Americans give up looking for work because there are no longer jobs available they are not included in the workforce, also called the labor participation rate.  Persons not in the labor force (as seen in the blue line below) hit a new record high last month.  The chart also shows people who want a job now, which is close to a record high. 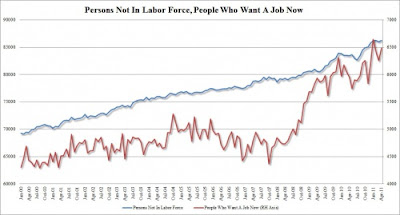 The final point, and the one least mentioned by the media, is that America is slowing moving further and further into a part time low income employment country.  The incredible chart below shows this clearly.  The blue line represents full time jobs lost since December 2007 (9.1 million) and the red line shows part time jobs gained (2.3 million) 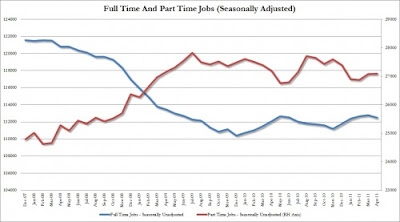 There is no real job creation or wage increase in our country, which is the foundation for real economic growth.    Our continued depression, which began in December of 2007, is about to begin the next leg down.  This will be accompanied by falling home prices, local and state governments cutting spending, a rising cost of living, and a federal government that moves closer every day to their "Greek" moment in the debt markets.

Until then, enjoy the pull back in commodities.  I hope you have kept cash on the sidelines available and you are utilizing this pull back to re-enforce your foundational positions.

A final look at where our current jobs recovery stands in relation to all others over the past century. (Bottom line) 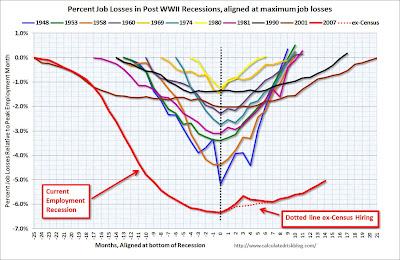