The news this afternoon all across the media is regarding the US debt ceiling, which we are told will bring about "catastrophic" consequences if not immediately raised by our political leaders.

Accounting gimmicks have pushed back the date needed to raise the ceiling to August 2nd.  I would plan on the decision to raise moving to the 11th hour and an agreement to be reached after "concessions" are made where both parties can claim victory.

The real news yesterday, going unnoticed by Americans who were captivated by the debt ceiling charade, was the TIC data released by the treasury on who is (not) purchasing our debt.

China's holdings of US debt continue to stream downward as they are quietly dumping our toxic paper into the market. 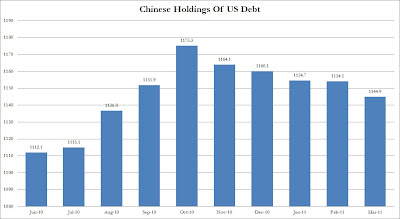 Until now this has gone unnoticed during the Federal Reserve's QE2 program, but when that ends in June, and if the Chinese continue to move away from US debt, then the first look at the endgame will make an appearance.