Gold Is Not An Investment: Part 2

Last week I discussed I the topic of Gold As An Investment.  I would like to expand on this subject further by looking at how you can attempt to measure gold as being under or over valued during this secular bull market.

The best way to accomplish this is by looking at gold's dollar value relative to the money supply.  During brief periods of history (early 1930's and late 1970's) gold has re-valued itself in the open market to account for the amount of new currency that has been created.  This has happened many times throughout history going back hundreds of years.

We are in the early stages of this process occurring again.  So the best way to figure out gold's current value is to determine where it stands in this accounting process.

In the graph below the black line shows what percentage gold's current price backs the money supply.  For example in 1980, when gold shot to $850, there was a brief period when the United States could have gone back on the gold standard.  At that price gold had accounted all new money created.

The black line then moves forward to where we are today, showing that the gold price currently would only account for 16% of the new money that has been created.  The red, blue, and green lines show what price gold would need to rise to back 25%, 50% and 100% of the current money supply.  To back the total supply, as gold has done throughout history, the price would need to be at $9,526.

This metric would show gold's current price as being severely undervalued.

There is another way to determine whether an asset has reached the mania or bubble stage of its bull market.  That is by looking at new supply coming on the market, as was recently seen by home builders flooding the market with inventory as prices were soaring during 2006.

The following graph shows the supply of gold entering the market (black line) as gold's price has risen consistently over the previous ten years.

It then shows the money supply growth during this period (green line). 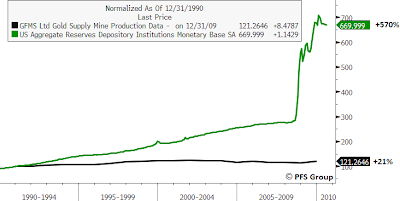 Does the new gold supply look like it is entering a bubble?  A mania?  Has it begun to account for the new money created with an upward price spike?

Not yet, but be patient, it will.