Rumors are streaming through the financial world today that Greece is in serious discussions to leave the European Union and the euro currency.

This news would have massive implications for the markets.

The result would be an instant decline in the value of the drachma to fair market value, and a rise in the value of the Euro as it would no longer have the anchor of Greek debt around its neck.  Greece would then either default on their debt or print the currency needed to service the debt.

This would trigger a massive run on Greek banks, which is already taking place at a slow rate.

Nothing has been confirmed, but I wanted to provide to you the answer to what would come next should this take place.  The following chart shows Greek 3 year government bonds in relation to the rest of Europe. (Note that Portugal and Ireland are rapidly rising as well) 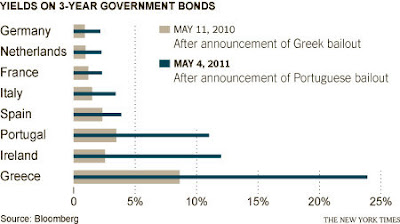