Corelogic reported this morning that home prices have fallen again by 1.5% month over month.  Prices are down 7.5% year over year and down 34.8% from the peak. 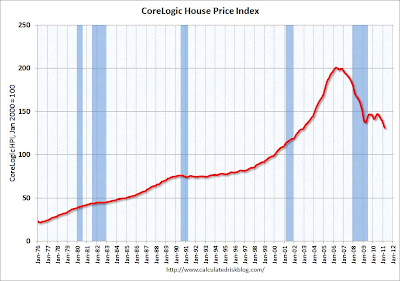 Zillow.com reported yesterday that home prices fell 3% in the first quarter of 2011, fell 8.2% year over year, and have now fallen for 57 straight months as seen in the red below. 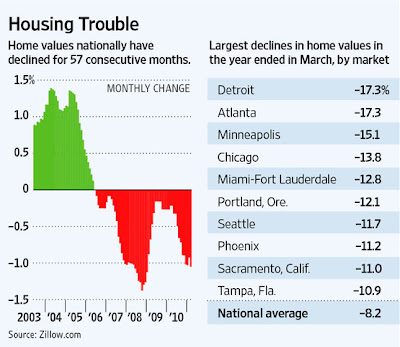 This means homeowners have lost $6.5 trillion just by owning their home over the last 5 years.  Estimates show that this $6.5 trillion represents half of the middle class's total net assets.

The story will get far more tragic from here.  The pent up supply of shadow inventory is staggering, mortgage rates are already at all time record lows, the government currently purchases 97% of all new mortgages, and the unemployment and income numbers continue to get worse month over month.

The next leg down of the housing market will wipe away any chance most Americans had toward retirement.