I spent a lot of time here focused on the reckless spending policies put in place by president Obama.  I think it is important to step back and remember that Obama inherited a terrible budget problem from George Bush.  For those that were not readers of this site during the Bush administration I will note that I was just as critical of the terrible decisions being made during that term.

The following excellent graph shows where we would stand today without the spending programs put in place by Bush before Obama took office. 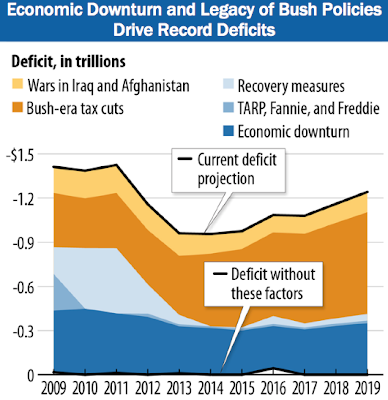 That being said, Obama has done everything in his power to dump gasoline on the fire.  If Bush can be considered the president that started the party, Obama will be remembered as the one that ended it. (And not by his own will)