The two big new stories this morning in the financial world are the death of Bin Laden (which I will let you hear about on mainstream news), and the major fall in silver prices last night around 8:00 PM. (okay, maybe no one still pays attention to silver)

Trading opened up as normal Sunday evening in Asia when silver suddenly fell off a cliff, diving about 15% in just a few moments. 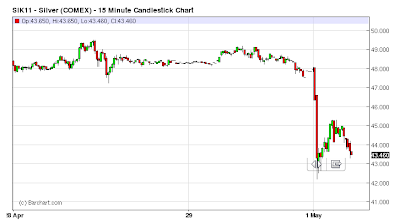 It has since recovered a significant portion of the fall, but investors are scrambling to determine to the why.

Thus far, and I will bring you more when I get it, it appears to be focused on the margin increases that took place on multiple exchanges around the world on Friday.  When margins are increased it means you can borrow less money from the exchange to purchase silver and either need to come up with some cash to cover the difference or sell silver to raise cash.  It appears someone may have been caught with their pants down.

The second news event was that Bolivia, which was in talks to nationalize their mines and cut off a major flow of supply to the market, decided against that last night.

Is this the start of the major and much needed correction in the silver market?  I certainly hope so.  When weak hands get shaken off it allows investors that understand the big picture to purchase metal at a cheaper price.

When the United States formally or informally defaults on its debt through hyperinflation, you will be far more concerned with the number of ounces you own vs. the price you paid for it.