Who Pays For EU Bail Out?

Well done graphic below from the Economist, which shows who contributes to the European bail out program and how much they add to the pot. One side is composed of funds from the largest European countries, and the other is from the IMF (International Monetary Fund) which receives its funds from a group of countries around the world.

Most people in America do not realize that $50 billion (and counting) of the IMF bail out money for these European countries comes from the American tax payer. 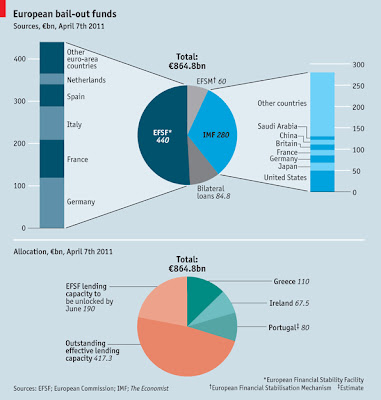 The second circle above shows the total size of the current bail out fund and what has been used thus far for Greece, Ireland, and Portugal.  Estimates show that the coming bail out needed for Spain will wipe out all remaining funds under the current structure.

The entire program is a large ponzi scheme as new debt is used to pay off the old.  It is a way to push back the day of reckoning, and that day is moving closer by the hour.