The following picture (below) provides another outstanding view of the simple problem facing Greece and why the current solutions will only compound the burden.

Based on extensive research by Carmen Reinhart and Kenneth Rogoth in their blockbuster "This Time Is Different" (the best book of 2010) we know that a country historically begins to run into trouble when their debt to GDP ratio hits 90%.

GDP (Gross Domestic Product) is the estimated total size of an economy.  The size of an economy (think of it as a large business) helps determine the likelihood it will be able to pay back its debts through future tax collections.

Just as with any business or individual, there comes a point when your debt sizes becomes unmanageable and your ability to make payments becomes unbearable.  This magic point discovered by the authors is at 90% debt to GDP.

The graph below shows that Greece was already above 100% debt to GDP back in 2006. 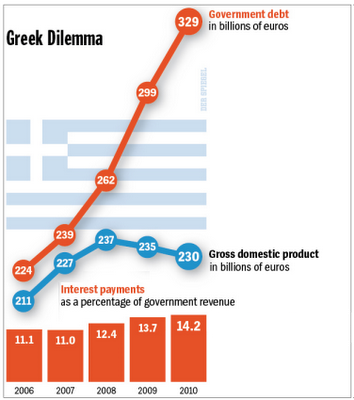 They had already crossed the magic number and it was only a matter of time before the market's confidence in the debt was removed.

You can then see what happened following 2006 as the total debt rocketed higher and the economy size (GDP) turned down.

The current bail out structure is set up to add hundreds of billions to the orange line in order to support current debt payments.  In exchange for these billions in new debt, the lenders are forcing Greece to cut spending, which will reduce the size of its GDP (blue line) and shrink economic growth further.

Do you see how ridiculous this is when it can be viewed on a graph?

The only option is for Greece to default on its debt and remove the noose around their neck.  Any additional debt (bail out) added will only compound the problem and make the day of reckoning that much more difficult.

Why have they refused to allow a Greek default?

Because it would trigger a banking crisis the exact same way a Lehamn default did in 2008.

What would I do if it was my decision?

I would collectively guarantee the checking and savings accounts of every individual around the world.  I would stand together and let people know that their cash in the bank will be there for them to withdraw no matter what.

Then I would step away, and let the free market heal the economy.  We would enter a global depression lasting 12 to 24 months with prices for every asset collapsing almost across the board.  Many people would lose their jobs.  Many companies would go out of business.  What happens then?

I would sell my gold, purchase a home, buy American stocks, and be proud to live in my country.

Will this ever occur?

The money will continue being pumped into zombie bankrupt countries and zombie bankrupt banks in order to ensure record breaking banker bonuses year after year.  The banks will then turn around and lace the politician's coffers with millions in campaign contributions.  The patient (the global economy) will continue to be pumped with heroine and morphine until it dies and there is nothing left to extract.