Highlights for this month's Job Report:

The government's birth/death model, which is a number magically fabricated out of thin air for the government's monthly estimate on small business jobs created, added 206,000 new jobs this month, meaning the real jobs number was -150,000.  Sources have told us that the number was due mainly to the job growth in unicorn breeding.

When you factor in the Americans who have given up looking for work, the government's U6 unemployment rate is currently at 15.8%.  The following shows the average duration of unemployment. 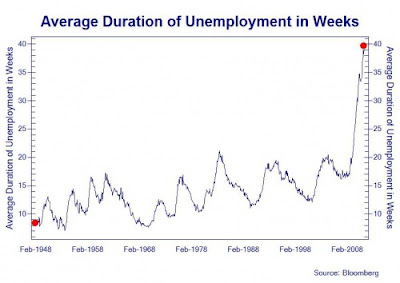 There is no recovery.  The current depression, which began in December of 2007, has been temporarily masked by endless trillions of government "stimulus" and printed paper.

The wealthy have felt the temporary benefits of printed currency which has purchased stocks and pushed their paper portfolio gains higher.  The middle class and poor have watched their home equity and jobs vanish, and have been left with a staggering sum of student loans, mortgage loans, credit card debt, and now government debt to pay off with their income declining and jobs not returning.

If Obama can make it through 2012 before we have our currency crisis, (change will only come when the crisis arrives) his second term will ensure we will be witness to the greatest economic collapse in history.