This post will push further than my normal scope of discussion, but it is important to look at the future of our global financial system as the world rapidly approaches the next major storm.

I often discuss how the coming global sovereign debt crisis will play out.  Country by country over the next few years will follow the same scenario currently playing out in Greece today.  It is the blueprint for the future.  The following is the order I believe the crisis will strike as it moves throughout the world:

The speed in which the virus spreads depends on the policy response from governments and central banks.

The size of each nation's debt crisis is larger as you move down the list above.  If any country decides not to bail out their government bond market with a flood of printed currency, there will be a banking collapse similar to what was seen back in 2008 during the subprime meltdown.  Banks hold a tremendous amount of government bonds and if they were forced to write down the value of those bonds they would not have the capital cushion to keep their doors open. (The Lehman Brothers scenario)

This does not factor in the derivatives market; the hidden off balance sheet bets banks place.  The term "CDS" or Credit Default Swap became a household name back in 2008 when investors found out banks like Goldman Sacs were hedging their real estate portfolio by taking out insurance on the bonds they purchased. (CDS contracts)  AIG took on the lion share of these insurance claims.  When real estate collapsed and the insurance was needed, AIG had no capital reserves to make the payments.

The size of the CDS derivatives market at the peak in 2008 totaled about $60 trillion.  To put the magnitude of that size in perspective, the entire value of all global stock markets combined is less than $60 trillion today.

There is another form of derivatives insurance called an Interest Rate Swap.  Banks, similar to the strategy used during the boom in real estate, use these contracts to protect themselves against sharp moves upward in interest rates; a move you would see when government bond yields rise sharply around the world.

The size of this Interest Rate Swap market?

It is important to note that in addition to Interest Rate Swaps, banks are also using Credit Default Swaps (CDS) to buy insurance against government debt default.  The size of the total derivatives market is staggering. The coming collapse is fairly easy to see and understand, just as the real estate collapse was during 2007.  What happens next is something that is rarely discussed.

At some point there will be a run away from paper government debt (and a continued run away from real estate debt) which will cause trillions of dollars to look for a home.  I believe a large portion of this will end up in commodities with the biggest winners being gold and silver.

What most people do not realize is that during this process the United States as a country will benefit greatly.  The following graph shows the top holders of gold for countries around the world: 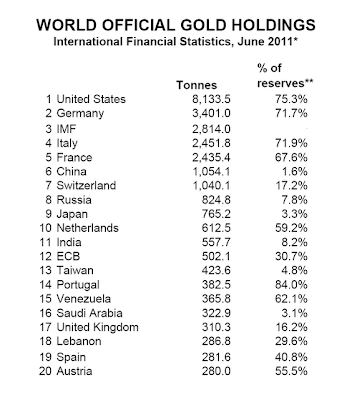 When gold re-values itself (thousands of dollars higher) to reflect the fallen value of paper currencies, the United States' real wealth will rise in relation to the rest of the world.  Does that make sense?  Take a moment to let this extremely important concept sink in.

Ironically, we have spent the past 30 years taking the goods created by the sweat and labor of foreign countries and in exchange we have given them I.O.U.'s.  Paper I.O.U.'s worth nothing but the believe that they will be able to purchase goods in the future.

When the world accounting process takes place, the United States will be left holding the largest share of gold and the largest military.  We will have the first chair during the conversation to create a new currency system.

Americans holding precious metals (and commodities) during this accounting process will move to the top 1% of wealth in our nation.  All other American's wealth will be revalued drastically lower to reflect the new currency valuation created.

This process could take a decade to unfold, but it is important to understand the entire picture as you make investment decisions on both the short and long term.