The world continues to stay focused on the developing soap opera of the "Debtmageddon" debt ceiling taking place on center stage where the most recent "drastic" republican cuts have been announced at $3 trillion in total. 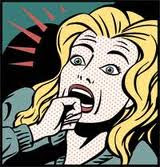 Gasp.  Who knew they had that kind of real thunder and power behind their strong words?

Soon after the CBO had a chance to run the actual "real world" cuts that would take place under the plan, and they came in at.....brace yourself.....$95 billion in cuts per year.

On a $1.4 trillion annual deficit.

Anyway, let's focus on the real world.  The United States will get its real debt crisis soon enough when our foreign creditors decide to stop funding the party.

But not yet.  The real debt crisis continue to unfold in Europe where Italian rates have rocketed higher today toward 6% : 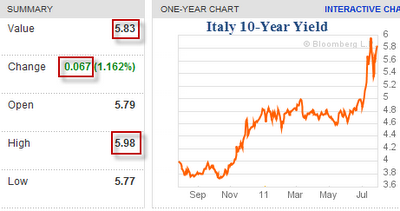 Spain has also once again crossed the magic 6% numbers: 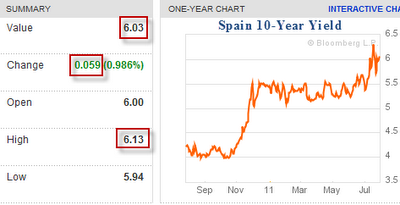 I have discussed it in length in the past but these rates getting out of control are a major problem for the global economy and could bring massive financial shocks to the system.

This week we received the Case Shiller home prices which fell again month over month, and are now down 4.51% year over year, the biggest drop since November 2009.  As the shadow inventory continues to build and more homes move underwater, the housing market is like an anchor tied to the foot of a drowning economy.

With no jobs, falling home prices, stocks on the verge of collapse, and a surging cost of living, Americans have the pleasure of sitting at home and listening about whether higher taxes or lower spending will save them.  The truth is that they will get neither, and at some point the rock star that never has to sleep and parties every night will hit the wall.  Then the real depression will begin.