Perhaps the most important piece of economic news released (the monthly jobs report would be a close second) is the GDP number which is released once per quarter.

The GDP (Gross Domestic Product) is the sum total of an economy for a given country.  It tries to measure everything: manufacturing, consumption, imports, exports, government spending, etc, etc.

Economists and financial analysts use the number as a baseline to measure the current value and future price projections for stocks, bonds, and the currency within that country.  It is also a helpful measure to know whether a country will be able to pay back its debt, but we'll get back to that last one in a second.

This morning we received the second quarter GDP and it was a complete nightmare arriving at 1.4% annual growth.  The first quarter was revised from 1.9% to .4%!

The number was of course shocking to Wall Street and the media who seem to believe America is in some state of recovery.  The truth is, which is hard for them to understand through the fog, that America entered a depression in December 2007 and what we have seen since are mini stages of growth and recession within the major trend.

What I found most fascinating on the release of the news was not the stock market plunging, but that gold simultaneously rocketed up to new all time record highs. 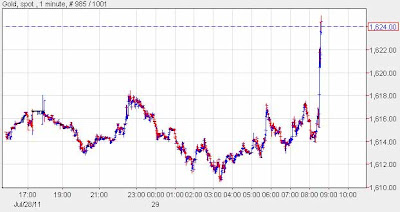 This means that a large portion of the market now understands that any slowing in the economy means an equal and opposite reaction in the size of additional money printing ahead from the Federal Reserve.

I have been talking about this for years now, and while a few years ago it took the market months to put the two together, this morning it happened simultaneously.

This disastrous GDP number opens the door for additional stimulus from the Federal Reserve in the form of QE3. (this only weakens the economy further which I have discussed in the past, but provides a temporary shot of heroine to confuse market participants)

The Fed's "dual mandate" to keep inflation under control and stimulate the job market can be best described by the picture below.  I can only imagine the stress Bernanke will find himself in as he has truly painted himself into a corner.

Finally, it is important to remember that GDP projections are used to determine future budget surplus/deficits for the federal government. A larger GDP means higher tax receipts (income) which would lower the annual deficit if spending were to remain the same.

The White House has projected GDP growth of around 4.5% over the next five years.  Today's GDP numbers show how ridiculous those projections are. We may move back into negative growth soon without additional temporary stimulus - think heroine.

Understanding this will help astute investors predict what the real budget will look like moving forward as GDP/income collapses and spending will soar.  As long as Bernanke is at the helm, the price of gold may be more undervalued today than it was in 1999 at $250.