Over 70% of our GDP is based on consumption, making the consumer confidence index released this afternoon an extremely important economic indicator to track for future growth projections.

The index fell off a cliff; from 59.2 down to 44.2 month over month.  The confidence index is now now back to the trough seen during April 2009. (When the stock market was about 50% lower)

In simple terms, while the American stock market has been artificially levitated by the Federal Reserve's endless printing, the American consumer has not had the opportunity to join the party.

The following chart shows the consumer sentiment index (green line) with the stocks that rely on consumer spending for growth (blue line). 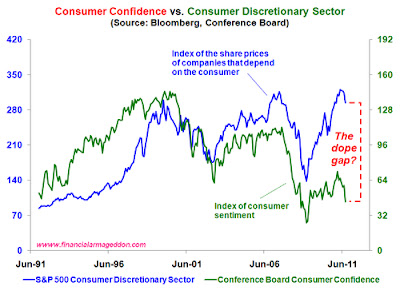 The disconnect is massive.  Either consumers are about to turn a massive corner and begin spending like it's 2006, or the shares of these stocks are going to collapse.

My money is on the latter.