Gold Corrects: What Next?

Gold has fallen close to $200 over the past 48 hours in one of the most violent corrections of the current secular bull market.

I threw up the caution flag earlier in the week for a new investor just entering the market based on the optimism in the market and the steep ascent of the run over the past few weeks. (See $1,900 Gold for full article)

The question now is: Where do we go from here?

All eyes are currently watching and waiting for the speech from Ben Bernanke tomorrow at Jackson Hole.  Last year at this time, when the markets were on the verge of heavily rolling over, he announced QE2 and sent all assets upward. (See silver price chart)  The following is a great graph showing two possible outcomes of where the market may head based on his "hints" in the speech tomorrow. 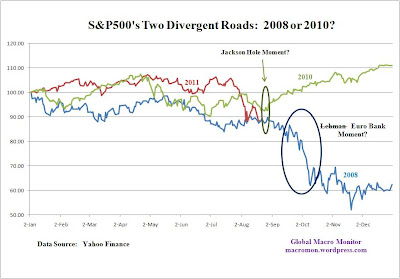 I believe he will not announce QE3 tomorrow, but he will create a new program extending the maturities on the Fed's balance sheet.  This is an old tactic used by the Fed decades ago called "Operation Twist."

If this program should be announced, I will explain exactly what it means and its effect on the markets over the weekend.

With QE3 on temporary hold, I believe the next form of stimulus is going to come from the White House.  Obama's approval ratings are plunging by the hour, and he knows he is on the clock to try and artificially boost our economy (like painting the exterior of a rotting house) before the 2012 elections. 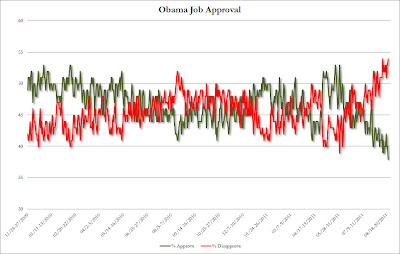 The new program will be titled something like: "The Job Creation Recovery Act."  He will increase spending in the short term in exchange for massive cuts out in the future.  He will try to have most of the cuts to occur past 2016 (after his potential second term).

Our country will be a shadow of its former self by 2016, so any cuts past that point are beyond meaningless.

After the announcement of the new program to save our country the Federal Reserve will then follow up with QE3.  My guess is that it will be larger in size than both QE1 and QE2.  His aggressiveness will depend, as always, on the current price of the stock market and how much trouble the large banks are in.  Right now Bank of America is hurtling toward the abyss, meaning Bernanke must come with shock and awe to save his friends.

The cost to buy insurance on a Bank of America default just crossed above the peak reached during the crisis of 2008. 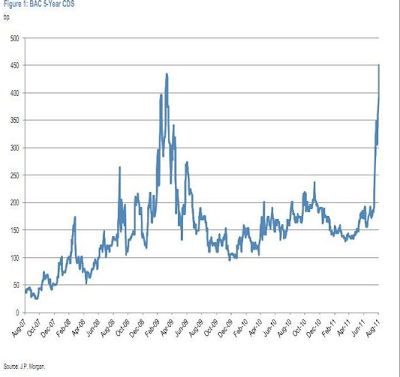 I see a continuation of the secular bear market in stocks, which began in 2000, before the combined stimulus arrives from Obama and Bernanke.

How far gold falls before beginning its next move higher is any one's guess.  As I discussed earlier in the week, I believe the mining sector represents the best value for investors entering the market today.  An investor with a long term view will be far happier entering next year's elections betting on mining shares helping their portfolio over the stimulus of our leaders.