I had some drinks with one of my oldest friends last night who was in town from New York on business.  He had another business associate with him and conversation came up about the economy and investing.  He mentioned that he knew someone who was invested in gold, excitedly saying that he was "killing it."

Of interest to me was that he himself was not invested in gold, and that it was just one person he knew who was investing in the metal.

For most of the 2000's, gold in general moved in lock step with stocks as part of the "risk on" trade. Recently gold has stepped away from that group and become part of the "risk off" trade which is normally occupied by US treasury bonds. 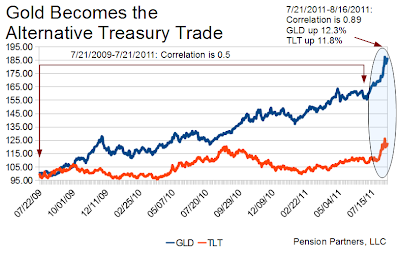 It is my belief that treasuries are in the late stages of a bubble, and that gold is in the 5th or 6th inning of a secular bull market. (I believe gold and silver have at least one large correction ahead)

At some point investors will care not just about the return of the paper assets they hold, but how much purchasing power that paper provides them.

Then gold and silver will move into an asset class of their own in the final stages of their secular bull market: the mania blow off.