Things have changed in the markets over the past week.  While before it was far more difficult to see the rotting economy beneath the surface, the rotting smell is beginning to bubble up for the world to see.

On Sunday night the markets received word that the debt ceiling would be raised.  I summed up the charade and how it would end a few weeks back in The Fictional Debt Ceiling.

Enter scene Monday morning, fresh off of news that our leaders have saved us with the debt ceiling compromise, the stock market plunges 266 points.

A major catalyst for this move was the ISM manufacturing report which came in at 50.9%, falling from 55% in June.  A print below 50 signals that the economy has begun to contract, and it is an excellent recession indicator which can be seen in the shaded areas below. 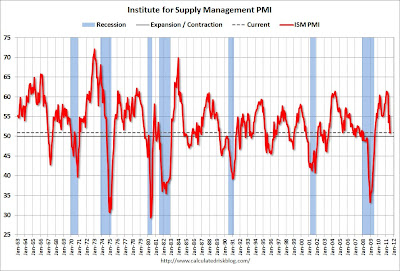 Another almost flawless indicator of recession is GDP growing at less than 2%.  We have just crossed over the magic line seen in the fantastic long term graph below.  Shaded areas again are periods of recession. 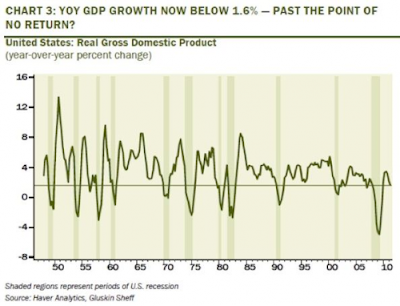 This is just the troubling news from our side of the shore.  The markets are also paying close attention to the European countries who are once again seeing their government debt falling into the abyss.  Italy, the death knell for the union and the the country that many predict will be the next Lehman, has over 400 billion euros ($560 billion) that need to be refinanced through 2012.  This is just rolling paper and does not include new debt needed to keep the oxygen running through the country. 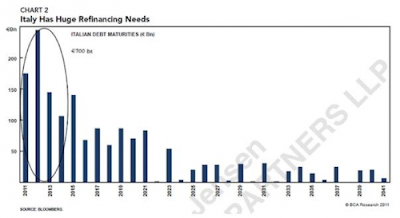 This massive confluence of economic news led the market to fall 8 consecutive days and it was down over 150 points in early afternoon trading today.

Then we got the headline.

He said he expects the central bank, which holds a policy meeting Aug. 9, to wait and see whether the recovery is really losing steam before taking any action. If that's the case--and inflation is coming down--then he would give "very serious consideration" to a new round of bond purchases.

The markets have turned, for now.  We must wait for the official stamp of approval that the next round of monetary stimulus is on the way.

Someone forgot to tell gold to wait.  Its rise has been relentless, screaming to new all time record highs every day.  As I'm typing this on Wednesday night, just moments ago, the Bank of Japan (their Federal Reserve) intervened in the currency markets to lower the value of their currency.

It is a race to the bottom.  The first to devalue the paper value of their unpayable debt burden wins.

This month marks the 3 year anniversary for this website.  In August 2008 I recommended loading up your portfolio with gold and silver and making sure you did not sell if the prices sold off in the short term.

Nothing has changed.  Stay the course.