Earlier in the week I discussed the hidden problem for the European banking system in The Real European Crisis Explained.  Today we will look at the portion of the sovereign debt crisis that is visible.

The following graph is an incredible visual of who owes who in the European Union.  When I use the terms "interconnected" and "contagion" this chart demonstrates exactly what I'm talking about.  It is a true web of debt. (Click for a larger visual) 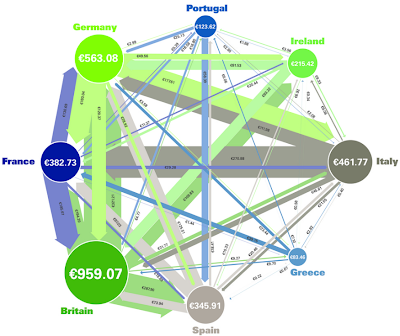 I will be coming back to this chart many times as we move round by round through the sovereign debt crisis, but let's begin with Greece since they are clearly the first country that will either default or receive the next round of bail out money.

The following graph provides a more focused view of who is on the hook for Greek debt in terms of the European banking system. 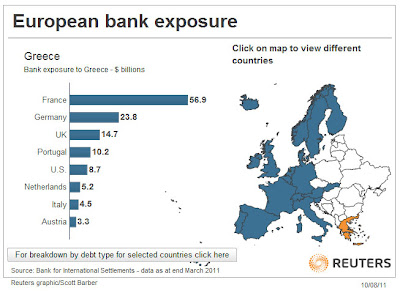 As you can see, French banks have a tremendous exposure to Greek debt.  It is why you have watched the stock prices for French banks and their stock index as a whole plunge over the past few weeks.

How big is the problem is the debt problem in France?

America's largest 3 banks currently have $5.86 trillion in debt, or 39% of America's GDP. (GDP = total size of American economy)  This number is way too high.

The largest 3 French banks currently have $4.7 trillion in debt, or 250% of France's GDP!  The banks are levered 30 to 40 times their available capital.  This means if they lend out $100, they have $3 in reserves against loan losses.  If the bank's debt falls in value by only 3%, they must close their doors.

Estimates now show that Greek debt alone will need to be written down between 50 - 90%.

Just for fun, let's take a look at what French bank's exposure is for Spanish debt. 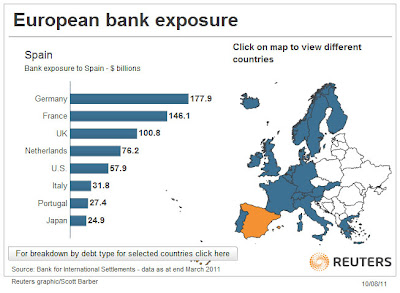 Or how about the big daddy - Italy. 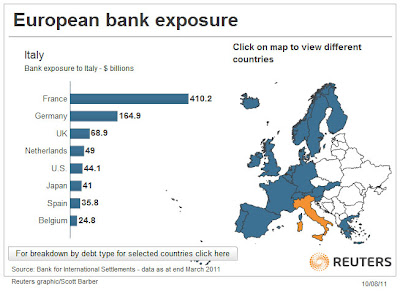 This is only a discussion on France.  Look back now at the web at the top of the page and you can see that every country is in the same situation.

This week the Federal Reserve re-opened their swap lines with the European Central Bank.  This means they will provide dollars in exchange for euro's, a program used heavily during the financial crisis of 2008.

Every day we move closer to the breaking point.  If stock markets continue to fall (the German stock market is down close to 30% over the past 2 months) then central banks will do everything in their power to preserve the system.  While gold and silver may fall during the panic it will only be providing another attractive entry point, similar to what we experienced during the fall of 2008.