Gold Pull Back In Perspective

For those new to the gold market, the following chart provides a review of the major gold pull backs since the secular bull market began in 2000. 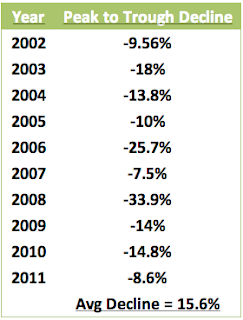 Gold pulled back 20% from its highs a few weeks ago, touching the lower $1,500's in early Sunday morning trading.

We are currently in stage 3, optimism, for the current secular bull market in gold.  I would speculate that we reach stage 4 sometime between 2012 - 2015.  This is the point in a bull market when the general public begins to enter the market in force, seen in Internet stocks from 1998 - 2000, real estate from 2004 - 2006, and in bonds today which are currently in a massive bubble.

There will continue to be massive pull backs along the way, and we may see gold hammered again even harder as the European Union moves closer to financial collapse.

Those that understand market cycles will continue to add physical metal to their positions as the weak hands are shaken off again and again.

For additional content on secular cycles, you can review articles I wrote during the last major gold correction (34%) during the financial crisis of 2008:

The Psychology of a Bull

4 Phases of the Bull