Total household debt in America grew at an exponential pace from 1971 to 2008, when it hit a peak and began to turn down. (Government debt took the baton and has exploded higher since the consumer debt peaked)

This was due to Americans paying down debt they already owned, as well as their reluctance to take on additional debt in the form of new mortgages, car loans, credit cards, furniture/best buy credit, etc.

One portion of household debt continued its rapid growth ascent and even picked up the pace right through the current credit crisis: student loan debt.

The major beneficiary of this increased borrowing is not the students (who would pay a lower tuition if their ability to borrow was taken away and have a far lower debt burden leaving school) but the universities who can charge extravagant prices knowing that students can take out (government) loans to attend school.

In addition, many younger students who have recently lost their jobs have decided to go back to school to get their graduate degree (and add additional student loans).

This is a disaster in the making.  Student loans, unlike most other household debt, cannot be erased after a bankruptcy.  You are a prisoner for life. 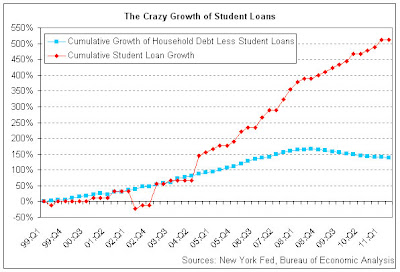