Why is this so important?  Before we get there, let's discuss how and why this came about.

For decades the Swiss Franc has been considered the golden standard for how to treat a currency.  They do not run massive deficits and they have always pledged monetary control.

During the recent collapse of the European Union (Greece, Portugal, Ireland, Italy, Spain) over the past 18 months, citizens of those countries have removed their savings deposits from local banks and transferred them into Switzerland accounts.  They have done this in fear of a banking collapse, which is a well grounded decision.

The Swiss banking system is in excellent shape, and at the same time investors have felt great about holding Swiss currency.  This has proven to be an excellent investment decision over the past 12 months as the Swiss franc has appreciated greatly against the Euro (and almost every currency in the world).

There is a problem, however, that has been building.  Switzerland export companies have begun to lose a serious competitive advantage as the value of their currency has risen dramatically.  It now costs more to purchase goods from Switzerland than for example Germany, another heavily dependent export economy.

This morning the Swiss central bank took action and have pledged to halt the rise.  This means that they will print and purchase assets outside of Switzerland to devalue their own currency.

They have tied an anchor to the sinking European Union.

The ramifications for this are enormous.  Last night there were two safe havens from the global money printing and currency devaluation taking place around the world:

This morning there is now only one.  We are moving into the next stage of the global financial crisis: currency wars.  It is an excellent time to look again at the graphic that displays where we've come and exactly how it will play out ahead of us. 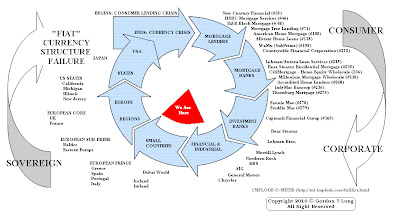