A Country Dependent On Government

Part of the reason I believe there will not be a change in course for government spending without a "Greek" like crisis is that Americans are now more dependent than ever on government support.

With Governor Christie removing his name from the Presidential race there once again remains no candidate with the stomach to do what is best for the country long term over what gets them elected and higher in the polls short term.  (Other than Ron Paul who does not have a realistic chance of winning)

Nearly half, 48.5%, of the population lived in a household that received some type of government benefit in the first quarter of 2010, according to Census data. 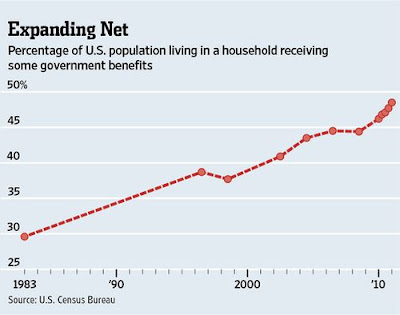