The 2011 fiscal year for the United States has now come and gone.  Let's take a look at how well we managed our finances on the year:

The debts are accelerating as we move toward the infamous year of 2012 when the the first of the baby boomers begin to retire in force.  It is important to remember that after contributing to their 401k their entire lives to save for retirement, these baby boomers will now be removing their hard earned money from their 401k in order to live the good life.

The good life, unfortunately, will be short lived for many.  We are rapidly moving toward the United States of Greece.  From Jim Quinn in his article today:

Kenneth Rogoff and Carmen Reinhart in their book "This Time is Different: Eight Centuries of Financial Folly," using data from 44 countries over 200 years, concluded that once a country’s national debt exceeds 90% of GDP, the economy stagnates and ultimately makes that country vulnerable to a debt crisis. The U.S. national debt as a percentage of GDP is currently 97% and will reach 107% in 2012. This does not count state and local debt, Fannie Mae and Freddie Mac debt, and the unfunded liabilities for Social Security and Medicare. We are at the same place Greece was in 2007. But we’re no Greece, right? This time is different. 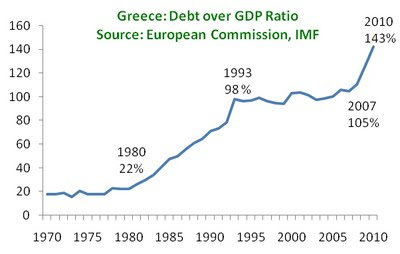