News headlines continue to be dominated by the events in Europe.  The United States (and the rest of the world) continues to slowly sink back into deep recession based on the stream of current and leading economic indicators week after week.

This development is occurring almost completely unnoticed due to the drama in Europe.  I will discuss these economic indicators in the future, but now let's get back to the very important news from Europe today and how it will impact the bigger picture moving forward.

Two days ago a new head of the European Central Bank began his term.  This would be the equivalent of someone new taking over the Federal Reserve with Bernanke stepping down.  The new head is Mario Draghi and he entered the spotlight by shocking the markets with an interest rate cut down to 1.25%.

Only 4 out of 55 of the major economists polled felt there was an interest rate cut coming.  All things being equal, this is bullish for the US dollar (and other currencies) and bearish for the Euro.  A lower interest rate means investors will now get a lower rate of return for holding their money in Euros.

This is just another case of Central Banks around the world doing their best to devalue their currency to ease the burden of debt that both their governments and citizens hold.  If the currency is worth less tomorrow, the debt you have incurred in that currency will be easier to pay back. 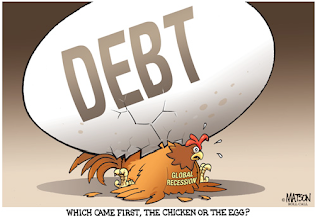 I want to take a moment and try and explain how all currencies are now interconnected and in a race to debase against each other.  This may be a bit confusing, but it is important to try and understand to see the big picture.

All things begin with the United States, the world's reserve currency, the world's largest economy, and the world's largest debtor.  The United States is currently employing a tactic called "financial repression," an extremely important topic that I will dedicate an entire column to in the future.  In simple terms, it means that they plan on keeping interest rates lower rate than the rate of inflation.  Bernanke has promised to keep interest rates at "extraordinary" low level for 2 more years (in his August speech) while he has targeted inflation between 2 - 4%.

If interest rates are at 2% and below, while inflation is running at 2% and above, this is slowing removing the size of the debt burden America faces.  Our economy will grow in nominal size due to inflation (GDP) but our debt burden will slowly diminish.  This tactic steals money slowly from tax payers, pension funds, insurance companies and foreign creditors by devaluing the debt the United States (and its citizens) owe.

This is America's strategy: a slow and steady devaluation. (I do not believe it will occur slow and steady but that is a conversation for another time)  Now let's tie in the next tentacle in the global interconnected web of currencies.

China has pegged their currency to the US dollar.  This means that when dollars wash onto their shore they must print an equal amount of currency to keep the peg in place.  This has caused tremendous inflation and asset bubbles (real estate) within China's borders.

Next up we have Japan who, like America, has embarked on a continuous program of Quantitative Easing (printing money) to try and keep their currency lower and stimulate exports.  In addition, the Bank of Japan enters the market on a regular basis to devalue the currency directly.  (They sell Japanese yen and purchase other currencies)

The UK has announced a similar program of Quantitative Easing and has recently upgraded its size.

Until recently, Australia, Canada, and Brazil have been a source of safety but their currencies have strengthened significantly as money has rushed into their countries from investors looking for higher returns. (These countries have higher interest rates compared to the rest of the developed world)

Real estate bubbles have formed in these developing countries and as these bubbles are beginning to deflate, their central banks are now lowering interest rates (just as Europe did today) to help ease the pain.  Lower interest rates = currency devaluation.

Now, taking a step back do you see how it is all tied together?  Many ships are going down for fundamental reasons and the ones that have the ability to stay strong have anchored themselves to another sinking ship.

Every country wants a cheap currency because it helps their exports and lowers the debt burden the country faces.  However, we live in a zero sum world and every currency cannot devalue against each other.  If the euro falls in trading this afternoon, then somewhere in the world an investor has sold euros and purchased another currency causing that currency purchased to rise in value.

There is one more currency I have not mentioned that is traded in the global forex markets.

This currency has no central bank to try and make it devalue, it has no interest rate to been lowered, and it has no counter part risk.

Every currency in the world is slowly devaluing together against gold.  This has been happening since 2008 when the global debt crisis began, and it will continue until gold has revalued itself to account for all the paper money that has been created.