The BBC put together an excellent interactive tool this week showing how much sovereign debt the major insolvent countries owe to each other.  It creates an excellent view of the web of toxic debt.  The countries they used in their circle of death:

All of these countries will face a government debt crisis this decade so it is important to understand how each default will impact the others in the web.

We will come back to these pictures many times but today we can look at the two major countries infected first to see who will be hurt most by losses on their bonds:

First up is Italy where you can see the brunt of the pain is directed at France (France purchased a tremendous amount of toxic Italian debt).  This is the reason why the major French banks, as well as the credibility of French government debt itself, are both plunging. 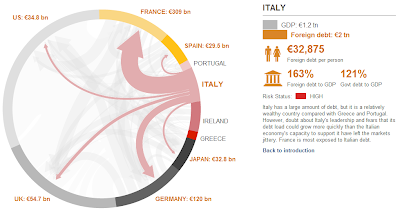 Next up we have Spain who is rapidly approaching their "Greek" moment right behind Italy.  Their debt is spread out more evenly around the world providing the opportunity for all countries in the web of toxic debt to experience massive pain together. 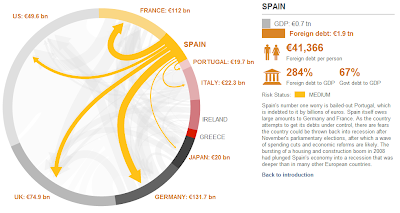 While they are not on the radar just yet, I want to take a quick look at two upcoming blockbuster sovereign credit disasters (kind of like previews for the new Harry Potter or Twilight movies)  The first is Japan.  Their story is interesting because at first glimpse it appears that their debt problem may only be as large as an Italy or Spain.  Why?  The Japanese people own the majority of the Japanese government debt.  The nuclear sovereign debt bomb is actually sitting in their own country, which you cannot see on this graph. 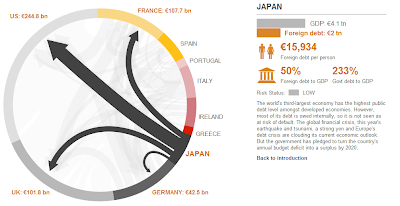 Finally, we have the United States, which almost makes you laugh when looking at it because it is so terrifying.  The United States is in the exact opposite situation as Japan.  They are in just as much (far worse) trouble in terms of the size of their sovereign debt crisis only the majority of Americans do not own the debt; it has been purchased by other countries both in the web of death and in other areas around the world (you cannot see poor China on this picture - they own the majority of the toxic bonds).  When our toxic debt begins to implode it will not only ignite a financial explosion in our own country like Japan, it will also create a global financial nuclear holocaust around the world. 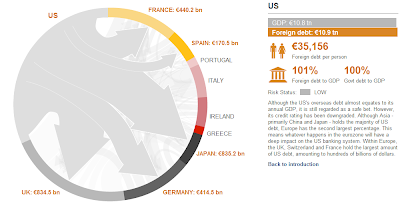 There is some great news behind all this coming destruction.  When the dust has settled, and it will only take a few more years, it will be the greatest buying opportunity for assets that the world has every seen.  Those who have portfolios still standing after the coming winter storm will have the opportunity to buy stocks and real estate at once in a life time bargain values.