While stock markets around the world finished in the red, the DOW Jones (American stock index) finished the year positive. Investors believe that the US has and will continue to decouple from the problems facing the global economy. 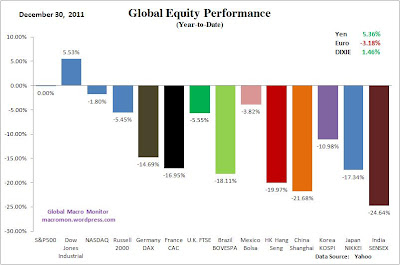 There are two main measures to look at when deciding on when to purchase stocks. The first is the fundamentals of a company such as earnings, profit, and future growth. The second is the sentiment toward the particular stock or the price that investors are willing to pay to gain access to future company earnings.

The fundamentals of the US corporate world have been strong since the market bottomed in 2009. Companies have the ability to move fast when the macro-economic world changes around them. Companies began to slash their biggest expense when the financial crisis hit, employees, and they have not brought them back up to this point in the cyclical recovery. Employees are usually the first to go and the last to return during a market cycle.

US Corporate profit margins are at one of the highest points in history as can be seen by the following graph.

So far all appears to be well and the water looks warm, but this is only one half of the discussion.

The graph below shows the long term P/E ratio for the S&P 500.  The P/E ratio measures the Price and investor is willing to pay for a company's Earnings.  A higher P/E means they will pay a higher price for earnings. 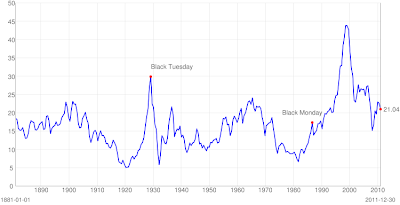 At the beginning of a bull market sentiment is very low toward stocks. The P/E ratio is under 10, and investors don’t want to own stocks at any price because they "know" they are just going to go lower. Buying opportunities such as this come about at historic market bottoms, and it was last seen in the early 1980’s.

When all the sellers have been flushed out of the market, everyone is now on one side of the boat. All it takes is just a few passengers to move toward the buyer's side and prices begin to move up. There are no more sellers on the selling side to continue to push prices down because they have already sold out of the market out of fear for lower prices. This is why sentiment is so important to understand.

As you can see in the graph above, from 1982 – 2000, P/E ratio’s began to climb year after year as investors slowly moved from the selling side of the market to the buying side. As they saw prices go up, their confidence rose, and they were willing to pay more for future company earnings because they were confident that the underlying price of the stock would move higher.

This viewed from a strictly rational sense is easily seen as the exact opposite approach an investor should take. However, it is the way market participants are psychologically wired to invest.

For example, imagine a household begins 2012 by reviewing which funds they want to contribute in the coming year. During 2011 Fund 1 is up 20%, Fund 2 is up 5%, and Fund 3 is down 10%. The average investor looks at these three funds and believes Fund 1 is a better option because of its recent performance.

Of course, this has nothing to do with how it will or should perform in the coming year. All things being equal, the fact that it is up 20% means that it is far more expensive and thus dangerous than it was to start last year.

This simple psychological component of the markets is what creates tremendous boom bust cycles and it is why the masses always get hurt the most during major market turns. They move in herds. It will always be this way.

Of course, after providing you with all this psychological mumbo jumbo and earnings data, I'm sure you want to know where I believe the markets are going this week, this month, and where they will finish 2012. I understand, we’re almost there.

Markets have a way of working back to their historical mean. Investor sentiment has been slowly falling since the peak of the mania back in 2000. This can be seen most clearly by looking at what the average American investor does in terms of mutual fund allocation. Since the financial crisis hit in 2008, Americans have been pulling their money out of US Stock Mutual funds at an almost uninterrupted rate. During the entire run up from the market bottom in 2009, investors have essentially “lost faith” in the stock market and have pulled hundreds of billions of dollars out of the market and parked it into bonds. 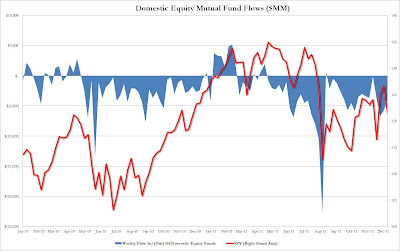 They have pulled from stock funds in 34 of the last 35 weeks. While looking at just the blue portion of the graph above, the money pouring out of the market, you would think that the market would be sitting at all time lows. However, there has been another force in the market place, an invisible hand.

That force has been quantitative easing. The Federal Reserve has been dumping trillions of fresh cash into the banking system, much of which has made its way into the stock market. This has not only matched the mutual fund outflow, it has over powered it, sending the market up close to 100% higher from its lows in March of 2009.

Investor sentiment today is still considered to be above the “bubble” level with P/E ratios at 22 to start 2012.

US Corporate profit margins are sitting at close to record highs. This means as an investor in order to believe that the market is going to move higher, you have to believe that corporate profit margins are going to push continuously higher from their already sky high levels. You also must believe that P/E ratios simultaneously are going to move from bubble territory, back up to ultra bubble territory seen back in the early 2000’s. Could this happen?

Absolutely. The Federal Reserve has made it clear they want stock prices artificially high. They are fighting the forces of gravity with every tool they can use.

If you wish to bet that the stock market will move from over priced to very over priced that this is the time to enter. I do not like that bet. So, to answer the question you have been waiting ever so patiently for, where do I think the US stock market is going during 2012?