Just because I love movie previews, I'll give you a quick snapshot at the upcoming horror films (sovereign debt crisis) to be released in Japan and the UK.

The following graph shows the combined public sector (government) and private sector (everyone else) debt for a group of major countries around the world against the size of their economy: their GDP.  This is the most common tool used to determine if a country can pay their bills. 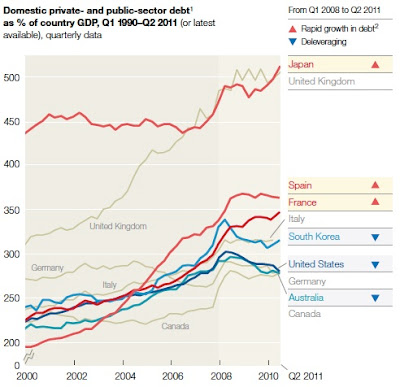 As you can see, the UK and Japan have the most horrendous balance sheets in the world, by far.  The majority of Japan's debt comes from the government while the UK's comes from the private sector.

It is only a matter of time until the bond market will turn on one of the two.  My bet is on Japan, but just as I thought Spain would explode before Italy back in late 2010, it could just as easily be the UK.  The point is, get your money out of both and if you want to speculate, take a short position.