Portugal: Quietly Floating Out To Sea

While everyone has been watching in awe as the stock market has risen relentlessly to begin the year (rising 18 of the last 20 sessions), no one has been discussing the other ticker that has risen in a continuous steady uptrend: 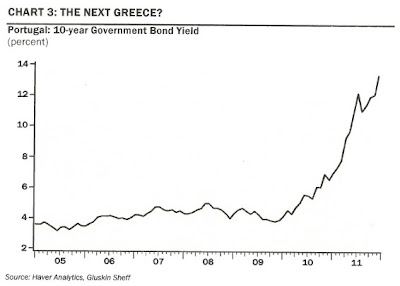 Portugal has stayed quiet, hiding in the shadows, as they wait to hear what kind of bailout package is in store for Greece.  Once the details are finalized, their leaders will step up immediately to secure the same (or better) package.

Portugal has a government debt to GDP ratio of 113%, far lower than Greece's horrific 170% and rising.  However, when you factor in their private debt, the total picture of Portugal's balance sheet is actually worse than Greece at 360% of GDP. Italy is at 120% of government (not including private) debt to GDP and Japan is over 220% (see the 2012 Outlook: Japan's Debt Crisis for more on their coming debt explosion).

To round out the crisis country list we have the debt to GDP of America, which has just crossed over 100% and is moving rapidly toward the crisis window: 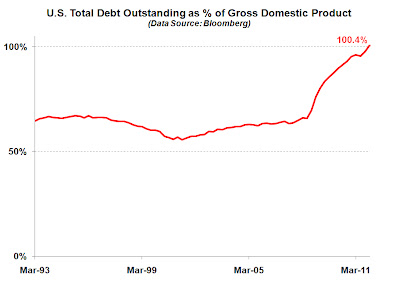 As I have mentioned in the past, I believe the crisis will move from Greece to Portugal, to Ireland/Hungary, to Italy/Spain, to Japan/UK, and finish with the United States.  I will continue to focus on each of these balance sheets waiting to erupt, but the immediate focus will soon be around the trouble in Portugal.

Keep a close eye on Portugal's 10 year government bond.  It appears to have already passed the point of no return and is headed directly for the grave yard to join Greece.  While the ECB has taken a stand to do everything to protect the Italian yield at the 7% line, it appears to have let Portugal go, like Tom Hanks letting go of Wilson in cast away.