Excellent graphic below showing the total debt exposure each of the "Too Big Too Fail" United States banks have to the PIIGS (Portugal, Italy, Ireland, Greece, and Spain), all of which are currently insolvent and on life support from the IMF, ECB, and other European nations.

It labels the exposure in two parts: 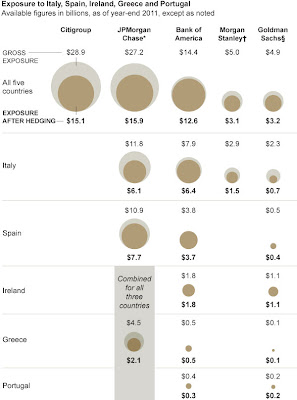 The second one, "exposure after hedging," I find interesting because this is the only exposure banks discuss when talking about their balance sheets. It means that Bank of America may have $14.4 billion in total sovereign debt on their balance sheet.  As a hedge, they have bought insurance (CDS) against the possibility of default on the debt or they have purchased another derivative type such as a put option.  Both of these tools are beyond the scope of this conversation to explain, but the important part of the "hedge" (which is never discussed) is that the payment of the hedge or insurance must be made by another entity - most likely another bank.

If Italy were to default and Bank of America purchased their insurance through a French bank (French banks hold the lion's share of Italian debt), then that bank will have closed its doors long before Bank of America has the chance to collect on the insurance payout (think Lehman).

Can you see how the financial system is interconnected?  This is why no one is allowed to fail and we continue to move through a series of rolling bailouts backstopped by the global central banks.  Do you think their printing has slowed since you have not heard news of quantitative easing recently in the news?  Not a chance.  The following graph shows the total growth of the balance sheets for the largest central banks around the world.


For more on the "next" sovereign crisis see Shorting Japanese Government Debt: The Trade Of The Century.