US Money Supply: Running On A Treadmill

A recurring question in the financial world is, "if the Fed is printing so much money why do we not yet see significantly higher prices?"

In our country we have what is known as a zombie banking system, a topic I have discussed repeatedly in the past.

In 2008 our largest banks became insolvent.  They still exist today but only as lifeless shells.  They do not make loans to small businesses, home owners, or students to create economic growth. 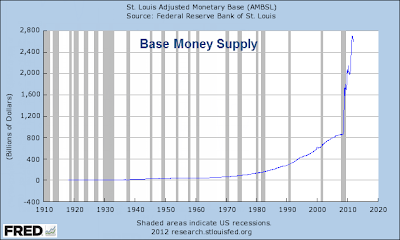 In a normal environment the banks would take this cash and lend it out into the market.  Lending to homeowners, commercial real estate investors, or small businesses allows banks to generate a high return on their capital (they can charge higher interest).  This has not happened.  The banks have taken the cash and immediately parked it at the Federal Reserve.  This can be seen in the chart below, which mirrors the first chart, showing bank reserves held at the Federal Reserve. 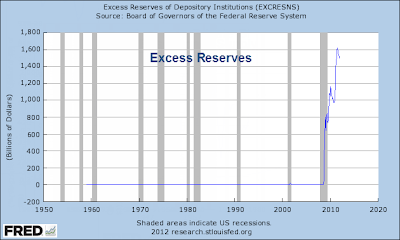 The banks have $1.6 trillion sitting in cash at the Federal Reserve which could be lent out at many multiples of that through fractional reserve banking.  For example, if the banks were not zombies but real financial institutions, they could lend out at least ten times that amount creating a surge in credit and money supply in our country.

The $1.6 trillion they hold at the Federal Reserve pays them $4 billion per year in interest.  This money pays for large bank bonuses and CEO salaries, who take the free cash and keep it away from American businesses who desperately need it to grow and create jobs.

Are you hopeful that this will soon change with our coming election?  The following shows the top campaign contributions to front runner Mitt Romney.

If there is no money being lent from our banking system you are probable wondering how Americans are still able to get a student loan or obtain a mortgage.  Who is doing this lending?

It is our wonderful government.  Yes, with a zombie banking system in place, it is tax payers who must lend to each other with their own money.  This is how total money and credit growth is still rising as bank lending has disappeared.

Our government has no money, it is given to them by tax payers and the shortfall is borrowed from foreigners around the world.  This will end, just as it has in Europe and just as it soon will in Japan.  Then the cost of "saving" every American during the crisis of 2008 will be crystal clear. 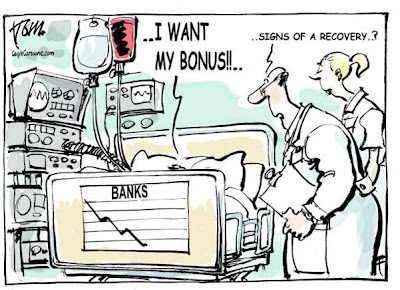