What Is Financial Repression?

Financial Repression is a term that will begin to hit the mainstream financial news and discussion boards soon.

I want to take some time to discuss it here in light of this week's key announcement from the Federal Reserve, which I discussed on Wednesday in FOMC Meeting: Gold Explosion.

To define financial repression in simple terms, it means that the Federal Reserve will focus on keeping the nominal rate of growth higher than the cost to service debt.  Now let's take a step back and dig into what that actually means using an example. 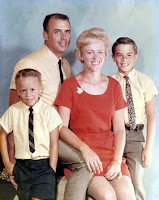 Joe makes $100,000 per year allowing him to comfortably make his payments every month and support his family.

Now, imagine that inflation begins to rise (similar to what we saw in the 1970's).  The cost to purchase food, gasoline, pay his medical insurance and take his family to the movies goes up by 8% in 2012.  Joe is a strong performer at work and his company wants to keep his talent in house so they provide him with an 8% raise to compensate for the rising cost of living.

Joe now makes $108,000 per year and a portion of his living cost has risen, however, his debt burden is still locked in at only 6% on the $400,000 he owes, making it easier for him to pay his monthly interest payments.

This is exactly how financial repression works.  Sounds good right?  Let's extrapolate it now into the real economy.

The Federal Reserve wants the GDP of America to grow every year.  GDP means Gross Domestic Product and it is the best measure of the size of a nation's economy.  GDP can grow through natural causes like higher productivity, higher demand for goods, new technology (iPads) or medicine (cancer treatment) created and exported overseas.

It can also grow through inflation.  If the cost of an iPad goes up by 10% this year and we export an equal amount of iPads in 2012 vs. 2011 the total effect on GDP is still increased by 10% in nominal terms.  The same goes for an increase in steel prices, movie tickets, or the cost to wash your car.  All these goods and services produced, consumed, or exported add to the total nominal GDP (real GDP subtracts inflation from the total - nominal GDP includes inflation).

Why does the Fed care about nominal GDP?  Because just like average Joe, if the nominal rate of GDP grows at 4% per year, and the interest on servicing the Federal debt burden is only 3.5% then we are growing out of our debt burden through inflation, even if 80% or more of our GDP growth comes from currency debasement.

Our current federal deficit is now around $15 trillion.  Our current GDP is also around $15 trillion.  This means we just crossed over the 100% debt to GDP level.  Going back hundreds of years in history has shown (which you can read in depth about in the incredibly well written book This Time Is Different) that a country begins to get in trouble when their debt to GDP crosses 90%.  This means that the US is in the danger zone.

The US has three choices of how to deal with the deficit:

1.  Grow our way out of it by stimulating the economy with a short term increase in federal spending stimulus programs and tax cuts.  The hope is that the GDP will keep pace with or surpass the debt increases.  Think of it as a race.  For example, if the size of our economy (GDP) grew to $30 trillion (doubled) this year due to business growth that pushed our deficit up to $17 trillion, it would be considered (by our economic leaders) as a success.  This is the current strategy being used by our government. 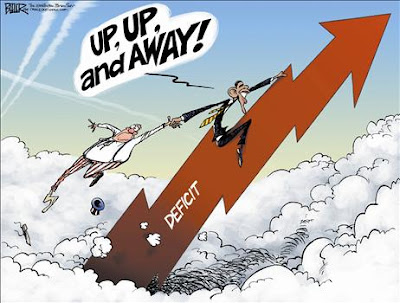 2. Grow our way out using inflation and financial repression.  The Federal Reserve announced this week that they would be inflation targeting.  They will keep the rate of inflation at a target rate in hopes that the nominal rate of GDP will push higher and ease the debt burden. 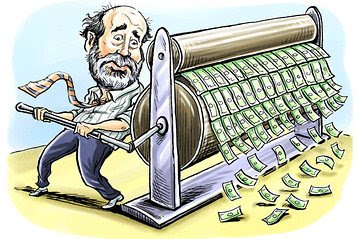 3. You can cut government spending and cut taxes trying to stimulate the economy through real growth (not inflationary and government stimulated).  This policy will shrink the economy and GDP in the short term and will bring extreme pain to the portion of the economy that is now dependent on the government transfer payments.  It requires a politician to tell the American people that there will be hard times before things get better.  Based on who is currently in office and the contenders to challenge them running today, this policy is not even being mentioned. 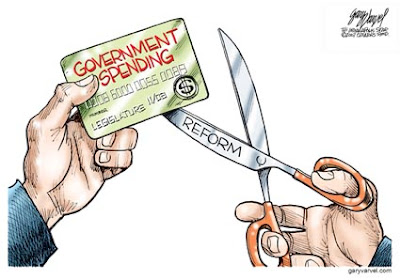 Our government has chosen to combine choices 1 and 2 to deal with our problem. So what impact will this have on our economy and your investments?

This strategy will first and foremost punish savers and reward debtors.  If Bernanke says he is targeting an inflation rate of 2%, (I believe he is actually targeting an inflation rate of 4%-5%) anyone holding cash in their savings account at close to 0% is losing purchasing power every year through inflation.  It also punishes people on fixed incomes like social security or pensions as the cost of living is rising faster than their monthly check.

Why is Bernanke doing this?

Bernanke has the ability to create money by printing dollars and purchasing assets that banks own, such as US treasury bonds or mortgage bonds.  What Bernanke cannot control is what the banks do with that money after that point.  This is known as the velocity of money.

After the collapse of 2008 banks have taken this free money from the Fed and they have redeposited it right back at the Federal Reserve. I discussed this in depth using visual charts in US Money Supply: Running On A Treadmill.  When the economy is strong banks will re-lend the money out into the economy to businesses, home buyers, or consumers. This pushes the money out into the hands of American people, which then creates velocity.

Using inflation targeting Bernanke is trying to push these reserves out into the economy and into riskier assets such as stocks, corporate bonds, or consumer loans, all which have a return higher than the targeted rate of inflation.  Bernanke is telling the banks they can take a guaranteed loss of at least 2% per year (they earn .25% holding money at the Fed) or they can roll the dice by lending it out (or buying stocks - which is actually lending/investing in corporations).

It is a game of chicken and investors must pay extremely close attention to the game being played because it will have a major impact on all investment classes.

I will continue to monitor the action week by week and alert readers to major investment opportunities.  Until then, I think a portfolio should be structured the same way I discussed to open the year in 2012 Outlook: How To Invest. When we get a better gauge of who will win this game of chicken, the battle of deflation vs. inflation, I will update readers here.