An asset price rises both for fundamental and psychological reasons. As humans, we tend to move in herds which requires an investor to study more than the raw data of a profit loss statement for a commercial building to determine its future price.  The same applies to the decision to purchase the IPO share price for Facebook or a 5-year government bond in Italy.

A computer can look at these investments and based on extensive information, provide you a detailed overview on why an investment is a good or bad decision. However, an investment's fundamental under or overvaluation often times has very little to do with the direction its price will move (in the very short term).

The following outlines a simple flow chart of the herd mentality during the phases of an investment cycle: 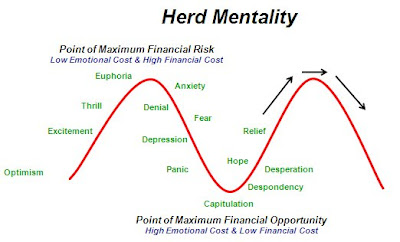 This chart can be laid out over almost every secular bull or bear market throughout the last two hundred years. There are tremendous works on human psychology that are beyond the scope of this discussion, but understanding this herd mentality is extremely important before making any investment decision on stocks, bonds, real estate or gold.

When making an investment decision, it first appears counter-intuitive to not purchase something that is popular or even in a state of euphoria. If everyone is buying it, then it means it will most likely go higher. To briefly explain why it is the opposite, let me use a simple example:

You are on an island with 10 people each of whom has $1 dollar to spend. There are 20 apples available to purchase and each apple costs $1. The first 8 people spend their money purchasing an apple, leaving only 12 apples remaining. It would appear to the two remaining island residents that a purchase of apples is a strong investment.  They get psychologically caught in the herd mentality and decide to purchase thinking their apple investment can only go higher. 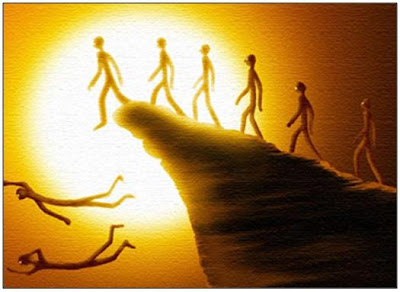 With 10 apples remaining, there is now no more cash available on the island to purchase - they are now fully invested. What happens to the price of the remaining 10 apples? They plunge in value.

Do you see how this concept can be extrapolated into the real world? This shows the importance of sentiment of the market in an investment decision, sometimes known as the willingness of an investor to make a purchase.  This is a concept we will return to.

What if the apple vendor allowed apples to be financed at 100%? The price of apples would once again surge as a greater supply of buyers would be able to enter the market. This is a crucial concept I will come back to as we move through this forecast.

In the previous section, we looked at the factors that allowed lending restrictions to loosen and allowed more buyers (greater demand) to enter the real estate market. Now, we must review the darker side of the story: the fall. Let’s get back to where we left off in our story, 2006, at the absolute peak of the mania.

During the run up, it did not matter if a homeowner could not afford to make the monthly payment on the mortgage because they could just immediately put the home back on the market and sell it at a profit. New home buyers would purchase a contract on a home and when it was built and ready to close six months later, they would immediately sell the home for a $50,000 profit.

Many Americans left their jobs to flip real estate for a living. People bought second homes, and then third homes. Money was removed from home equity to finance vacations, cars, and new TV’s. In essence, the herd moved all in, just as the last two residents on the island did when they purchased their apples.

What happened when everyone owned a home and there were no new buyers left to enter the market? Prices suddenly stopped rising and even began to fall. Homeowners without jobs that counted on rising home prices to make their mortgage payments suddenly could not do so.

In February of 2007, the initial shock wave rippled across the world’s media headlines. New Century Financial, which was a massive holder and distributor of subprime mortgages, closed their doors after disclosing massive losses on their mortgage holdings.

The financing machine was cut off. Soon, no income/no asset loans were no longer available. Then 100% financing was gone. In a matter of months, Wall Street would only accept the absolute best mortgages (20% down, strong income and strong credit).

This shrunk the total supply of new buyers (demand) tremendously. It came at a time when new home builders were producing new homes as fast as they possible could. These contracts were cancelled when the buyers could no longer gain financing and supply began to flood the market across the country.

This has brought us to where we are today.

Next: 2012 Real Estate Outlook: Where We Are Today