In the early 1980’s, a group of the nation’s top financial minds, specifically a firm called Saloman Brothers, went looking for a way to create greater profits off the sale of mortgage bonds (this was most famously documented in Michael Lewis’ first book “Liars Poker”). As with any brokerage house they make their profits based on the volume sold, and they determined that the best way to create additional mortgage volume was to bundle them together and sell them as a larger package of loans that would throw off a monthly income stream to hedge funds, wealthy investors, and the other top banks around the country.

For two decades the CDO was traded in the background in relatively small size and for the most part went unnoticed. The focus for the markets and banking system was almost exclusively aimed at stocks, mergers, and the tremendous profit potential available from taking the next shining star public. Companies like Yahoo, Microsoft and AOL, the Internet darlings. The Nasdaq, the stock exchange that focused on technology, rocket launched from under 1500 to over 5000 in a three year period to end the 90’s.

It doubled from 2500 to over 5000 in a single year. The public was mesmerized and began piling into to the stock market together as a herd driving prices up toward the stratosphere.

Stocks peaked in January of 2000 and went into free fall, crushing the retirement dreams of many Americans who bought close to the peak. 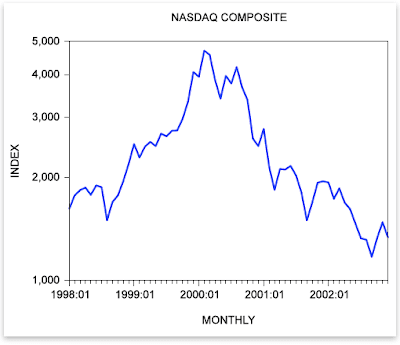 Americans had pulled their money from the stock market promising “never to return.” However, the 2000’s was a time where baby boomers were at their peak earning years and they needed to find a safe new home for their capital.

Real estate prices had not fallen since 1952 and Americans, with the help of their local real estate agent, could clearly see that it was the safest investment location for their money. The capital that was previously directed toward the stock market began to move toward real estate.

This coincided with an important period of time in global finance. In the late 1990’s and early 2000’s, as impossible as this may seem today, America was running a surplus on its national debt. This surplus, while great for America, provided a problem for other developing countries around the world.

When a country (like China) runs a surplus on their balance of trade (they export more than they import), they have a surplus of money which they need to invest. Up until that point, a major portion of the money was reinvested back into America in treasury bonds that we sold to cover our national debt.

With our new surplus these treasury bonds were no longer available. Who could provide the much needed home for this foreign investment capital?

The following graph shows the explosive growth in the securitization market from 2000 to 2006: 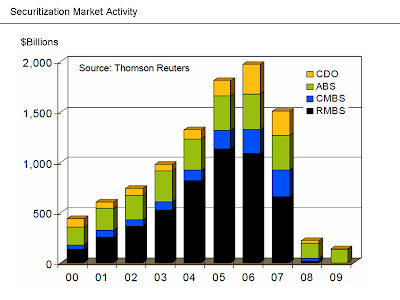 Wall Street needed more mortgages to feed the insatiable demand for these products. There was a limited supply of buyers that qualified for a standard mortgage (20% down with a high credit score and strong income) so they began to slowly lower the lending restrictions to allow more buyers into the market (greater supply of mortgages sold meant larger profits for the banks).

More buyers led to higher prices. Higher prices led to the illusion that home prices were safe, which led to even lower qualification restrictions. This led to higher prices, and so on and so on. Fannie Mae and Freddie Mac soon joined the party. After realizing they were being left in the cold with Wall Street taking on all the mortgage volume, they too lowered their lending restrictions and began purchasing everything they could get their hands on. All it took was a AAA approval from the rating agencies who were paid (by Wall Street) based on the number of mortgages they approved AAA.

The volume surged and the CEO’s of these companies (banks, Fannie/Freddie/rating agencies) took home bonuses in the tens of millions and they continued to loosen lending restrictions to gain access to even more mortgage securities.

In 2006, loans were being issued at 125% of the value of the home with no verification on a home buyer's income or assets in the bank. That means you if had no job and no money you could purchase a $400,000 home with nothing down and come home from the closing table with $100,000 in your pocket.

All these factors culminated together to create the perfect storm for real estate prices. The following chart shows the long term price of real estate from 1890 to 2006. 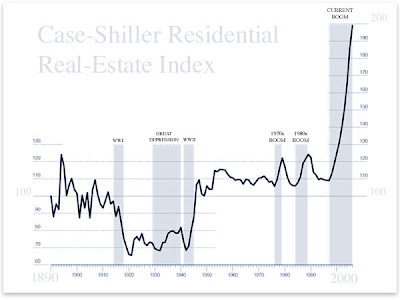 At its peak in 2006, the real estate mania was unlike anything the world had ever seen.  It appeared as if nothing could go wrong in the market. Next up, we take a look at what followed after prices peaked that year, the darker side of the story.