Behind The Curtain: The European Bank Bailout 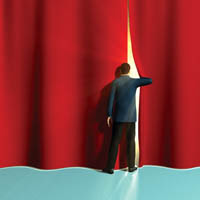 While all eyes are on how the bailout crew in Europe is going to handle the debt write down in Greece, there is a far more important story playing out behind the scenes in the banking system.

As discussed here in the past, the major problem with writing down the debt of Greece will be its impact on the banking system.  If a bank holds $100 in Greek bonds and the debt is written down 50%, the bank must take a loss on their balance sheet of $50.  In addition, banks have written insurance contracts, called CDS, that must pay out large sums if the debt of a country is considered in default (similar to your homeowner insurance paying out if your home is hit by a hurricane).

(As a quick side note: The actual amount of Greece's debt and insurance payments is not large enough to cause systemic risk.  The reason it is important is because the model used will then immediately put in place to determine the write down structure and balance sheet risk for Portugal, Ireland, Italy, and Spain.)

I have covered this simple concept in the past, but I wanted to review it before we move into how the financial leaders in Europe are handling the situation.

At this point, it has been strictly forbidden for the European Central Bank (ECB) to commit to a Quantitative Easing program - meaning they print money and buy European bonds directly.  A program like this (being used in America, Japan, and the UK) would immediately calm the markets.

Why can the ECB not print?  Because Germany, the biggest economic force in the EU forbids it.  Germany suffered a devastating hyperinflation in the early 1920's which led to economic chaos and ultimately the rise of Hitler.  The perverse effects of money printing still lingers in their memory.

So what has the ECB done to bypass big bad Germany?  They have gotten creative.

Throughout last year, they created a "sterilization" program.  This means that they would purchase bonds of troubled European countries and then remove that same dollar amount somewhere else in the banking system.  This process creates no "net" new amount of money in the financial system but forced capital to be directed at the troubled European bonds.

As the markets began to spiral out of control during the fourth quarter, they realized this would not be enough and they needed a new program.  Enter the LTRO.

By doing this they have pulled a fast one on Germany.  By providing the ruse that the money will be taken out of the system within 3 years, they essentially told Germany there is nothing to see.  However, a closer look at the ECB's balance sheet size (printing money grows their balance sheet) shows that there is definitely "something" to see.  Notice the explosion higher to end the year during the LTRO part 1:

During the first LTRO, the banks lined up in droves, handing the ECB $635 billion in toxic debt in exchange for the fresh, clean, cash.  On February 29th the ECB will be launching the second round of the LTRO and it appears it will be massive in scale.  The Financial Times reported this week:

European banks are preparing to tap the European Central Bank’s emergency funding scheme for up to twice as much as the ECB supplied in its debut €489bn auction last month, providing further evidence of the sector’s liquidity squeeze.

Several of the eurozone’s biggest banks have told the Financial Times that they could well double or triple their request for funds in the ECB’s three-year money auction on February 29.

“Banks are not going to be as shy second time round,” said the head of one eurozone bank at last week’s World Economic Forum in Davos. “We should have done more first time."

Three bank chief executives, all of whom asked to remain anonymous, said they were planning to increase their participation twofold or threefold.

An LTRO of this magnitude is going to make the ECB's balance sheet mushroom even larger in size.  It will also provide the banks with a tremendous amount of fresh capital to shore up their balance sheets.  It is expected that the Greek write down will take place sometime in March.  Can you see how the ECB is getting ahead of the write down?

This program does nothing to help the solvency of the PIIGS countries, or the people living there, but it protects the banks.  While the citizens of these countries and Germany are distracted by the headlines on write downs and job losses, the back door bank bailout taking place behind the curtain is invisible to the untrained eye.