This morning we received the most recent Case Shiller Home Price data (for the month of December), and the numbers once again shocked those waiting and calling for a housing bottom.  From David Blitzer, managing director and chairman of the S&P index committee:

"In terms of prices, the housing market ended 2011 on a very disappointing note.  With this month's report we saw all three composites hit new record lows.  Up until today's report we had believed the crisis lows for the composites were behind us, with the 10-City composite originally hitting a low in April 2009 and the 20-City composite in March 2011.  Now it looks like neither was the case, as both hit new record lows in December 2011.  The national composite fell by 3.8% in the fourth quarter alone, and is down 33.8% from its 2nd quarter 2006 peak.  It also recorded a record low.  If anything it looks like we have reentered a period of decline." 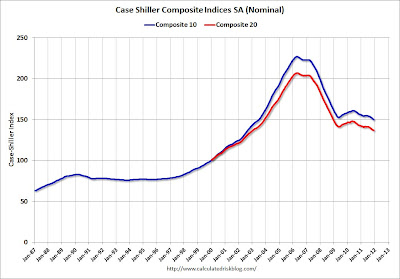