As part of the deal to send the next tranche of bailout funds to Greece they must pass "austerity" measures, which means spending cuts.  Their politicians approved the most recent round of cuts last night that included a minimum wage reduction and 15,000 jobs cut.  The net result will be a shrinking of their economy (shrinking GDP), while they take on additional bailout debt to make the current debt payments.  Make sense? 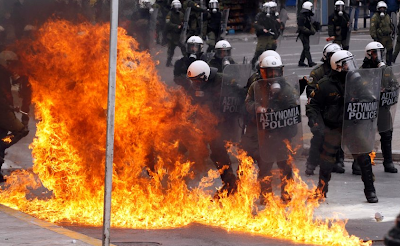 Nope, but the banks will be saved (will not be forced to take write downs) while the people suffer.  More and more people in Athens are beginning to understand this, and they took to the streets to show their support by burning banks and buildings across the city. 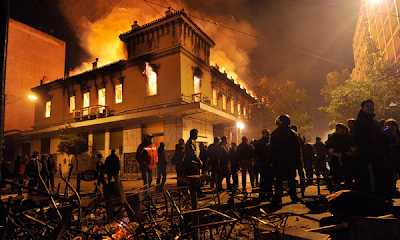 These pictures will be coming soon to every country that is dependent on debt in order to survive.  It will begin with Portugal, Italy, and Spain.  Then move to Japan, the UK, and the United States.  Our country currently runs a ponzi scheme with its debt financing and when it ends, as they always do, Americans will have the opportunity to view a skyline filled with smoke and flames.