While you're listening to one of the greatest minds in the financial world today discuss his thoughts on what is ahead, I'll provide you with some helpful visuals to demonstrate the "Currency Wars" taking place around the world in real time.

The first comes from Bud Conrad showing the balance sheet growth for the central banks in Japan, the Eurozone and America. Japan kicked off the most recent party (post financial crisis) to counter the currency strength taking place after the tsunami rocked the markets last year.  Then the EU followed up with their breathtaking purchases of sovereign bonds, and now it appears it is Bernanke's turn to once again join the party which he hinted at with his inflation targeting speech this week. 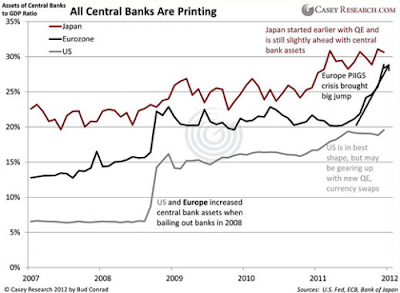 The second graph comes from John Mauldin and shows the staggering separation of real income vs. income that includes government transfers. This shows our country remains tremendously vulnerable to any sort of pull back in spending. 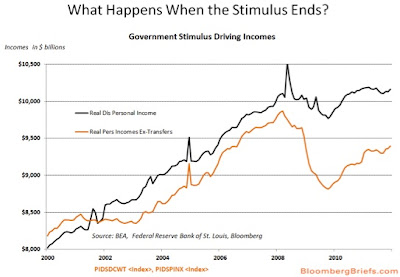 The next chart, from Jim Puplava, illustrates the breakdown of how our government spends money annually. You can see the enormous portion allocated to defense, health care, and pension costs. Bernanke described health care costs this week as "the elephant in the room."

We end with the staggering total federal deficit chart. It is becoming the classic "exponential" graph discussed by Chris Martensen in his now famous crash course. 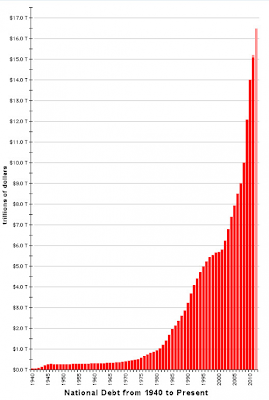