The mortgage settlement was finally announced this morning after over a year of discussion on how the banks would be penalized for packaging (collecting commission) on loans that they did not own.  This is know as fraud and if the average American participated in such an action, they would be immediately sent to prison. The final mortgage fraud settlement has been totaled at $26 billion that the "too big too fail" banks must pay out.  Part of the negotiation requires them to pay $2,000 to 750,000 Americans that entered foreclosure over the past few years.  Rick Santelli summed it up in excellent fashion this morning:

"The US taxpayers bailed out the banks, which are now using the balance of said proceeds to pay a settlement which amounts to the tune of $2,000 per every person foreclosed on in the past 3 years, in order to assure their vote for Obama, while in the process trampling contact law, as no longer will anyone in America honor anything printed and signed."


Once again, those that chose to stop making mortgage payments, whether because they could not afford to or because they wanted to live payment free, have now once again been rewarded.  Those that chose not to make payments on their underwater home and had the opportunity to live payment free for over two full years (the current average time before banks begin foreclosure) will now get a $2,000 check in the mail.

This concept of continuing to reward those that go as deep as possible in debt and then "walk away" can now be seen in parts of the economy beyond the mortgage market.  This past week the consumer credit report was released showing a surge in borrowing from the average American.  This was touted as bullish for the economy as consumers are now "confident enough to borrow again."

A closer look at the numbers shows something very troubling.  The following graph shows the month over month rise in total consumer spending against the rise in total consumer borrowing.  Take a look at the last two months of last year (the most recent data) which shows non-existent growth in consumer spending coinciding with a massive increase in borrowing. 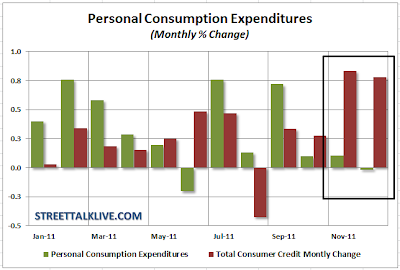 
The following chart shows with even greater clarity the debt needed to replace the decline in income: 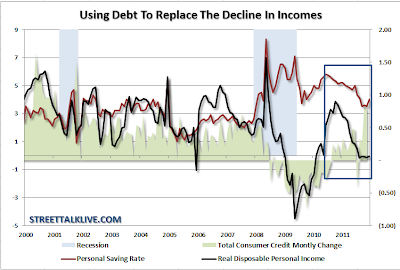 Let's say you are an average American with a home that is $150,000 underwater. You stopped making payments on your home two years ago and have had the double benefit of collecting an unemployment check for 99 weeks, which has recently come to an end.  You know that when the bank comes to take your home you will simply declare bankruptcy.  Would you not take out another $20,000 in credit card debt knowing you are only months away from bankruptcy?  What is the difference between $150,000 and $170,000 in debt you will not be paying after bankruptcy wipes the entire amount away?

This same phenomenon is taking place in students loans that continue to surge month after month.  Knowing that there are no jobs available, an enormous number of Americans between 26 - 49 have gone back to school.  They have taken out federal student loans that cover the cost of living and the cost of tuition.  Under current law you cannot cleanse federal student loans if you declare bankruptcy, but many people at this point do not care.  They know that there will be some sort of government bailout in the future if they run into trouble.

Every day we move closer to the endgame and this politically charged year continues to accelerate our economy toward the edge of the cliff. 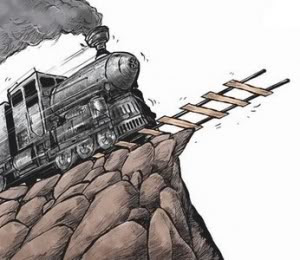