401K Options: A Look Into The Future

I have spent the past few months discussing the bearish outlook for stocks which is mostly based around the extremely high sentiment of institutional investors and traders as well as the high valuations that have been placed on companies and their future earnings.

There is one positive development for stocks that is rarely discussed, and that is the "retail" investors (the average person in America investing through a 401k or IRA) have been exiting stocks essentially non-stop over the past three years.  Why is this bullish?

This means that investors have capital that can move back into stocks if they begin to become more appealing.

The following chart shows the relentless selling (when the red areas move downward) vs. the minor buying of stock funds since January of 2010 (the data is very similar going back to early 2009). 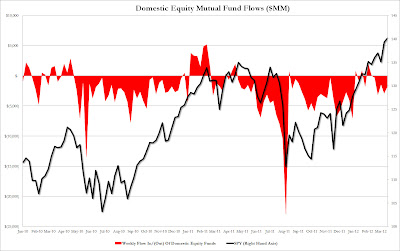 Every month investors in America have to decide how they are going to allocate their 401k's.  For some, picking these funds is the only investment decision they make in their lifetime (other than buying a home).  Most Americans spend about 173 hours a month (based on a 40 hour work week) focused on working and making money. They usually spend about 10 minutes or less deciding how to invest the money they are working for.

In general these decisions are made based on the sum total of the information they take in around them. This can be through the media, the price of stocks, or a friend that manages money for a living.

After the 2008-2009 crash the sum total of these thoughts for the average American = fear.  We don't have to guess this or take a poll.  We can just look at the chart above.

The vast majority of the 401k money is owned by baby boomers that are either in or very close to their retirement years.  They know they could not recover from another downturn in stocks so when they took that 10 minutes to review their 401k options every month, they moved money out of stock funds (sold) and into bond funds (bought).

The average investor loves to look at the "past performance" charts on their mutual fund options.  These charts show bonds have been rising in value for 30 years and (for those in longer dated treasuries) last year they were the best performers in any asset class (30 year treasury bonds returned close to 30% last year).

The "retail" investor was not alone in this buying.  They were joined by the Federal Reserve, which was engaged in QE2 to start 2011 (where they printed hundreds of billions of dollars and purchased treasury bonds) and Operation Twist to end 2011 (where they sold shorter term bonds and purchased longer term bonds). In addition to the Fed there was a tremendous amount of money exiting the Eurozone looking for safety. If you kept your money at a checking account in Greece, Portugal, or Italy last year, you were reading in the paper that there was a chance your bank could be closing.  This created a massive outflow of deposits into safer countries in Europe as well as bond funds in the United States.

Most of these 401k investors have no idea that the bond funds they are now sitting in could fall in value just as quickly as the stock funds.

But what if another scenario occurred? What if bond yields rise (bond funds lose value) and stocks fall in 2012. Now a baby boomer is looking at his 401k options which only include three choices:

This thought process is about 3 to 4 steps away from where we are today, but it is the kind of thought discussion you want to have now.  As an investor you don't want to be sitting at your kitchen table having these thoughts when everyone else across the country is at their table, you want to have this discussion today.

So what is 5 or 6 steps down the line in this thought experiment?  It is the next logical question: Where will these investors move their capital if they no longer trust stocks or bonds?

Before I answer that let me review the argument that "stocks and bonds cannot move down together," which will be a common rebuttal from anyone you discuss this concept with.  You do not have to look far to find a scenario where this took place.  Last year in Europe money was fleeing out of government bonds on worries there would be government defaults.  Did it move into stocks?  No, European stocks were destroyed last year, falling almost equally in line with the massive bond losses.  The trifecta to this downturn was that the European currency, the euro, was falling as well.

A second argument, which is perhaps more consequential, is that some investors will face a 10% penalty if they choose to sell out of the 401k "trap."  This will stop some, but not all.  There are now ways you can move 401k funds into a regular IRA even if you have not changed jobs (I have helped investors do this). By moving money into a regular IRA it becomes similar to a cash trading account, meaning investors can now invest in almost any stock, bond, ETF, commodity, or currency around the world.

So where will the money go? Analysts on television today (who sell stocks) have been touting that the money will rotate back into stocks which will provide the market the momentum it needs to push to new all time highs and beyond. They could be right. That is, after all, how the market has behaved in the recent past.

I disagree.  I believe that a large percentage of the money is going to move into assets that resemble liquid cash (treasury bills, cash deposits, or "under the mattress" type money).  This liquid cash does not have the benefit of the 2% (or less) yield that bonds provide, but it faces no risk of downside collapse.

Investors will also be looking to protect themselves from the potential loss of purchasing power. This can be accomplished through investments in commodities. Energy, agriculture, base metals, rare earth metals, and precious metals will begin to see investments from the "mainstream" investor for the first time in this secular bull market. If just a small portion of the 100% of 401k money invested in stocks and bonds were diverted into commodities it would rocket launch these investments higher.

Remember, I'm not saying this process is going to happen tomorrow. This is a thought experiment that projects out possibilities over the next 24 to 36 months. Maybe stocks will move back to extremely high valuations that we experienced in 2000. Maybe treasury bonds for our government (which is bankrupt and cannot pay back the money) will move from bubble levels to extreme bubble levels and stay there forever. Maybe commodities will move from undervalued to extremely undervalued and stay there forever.

I heard an interview recently with Bill Fleckenstein discussing the grossly under priced levels of precious metal mining shares today, and he said that it does not matter that prices are undervalued unless others understand the valuations and take the shares higher.  This is an important concept to understand as an investor putting your money into the correct (undervalued) assets while you watch bubbles blooming all around you. You are always at the mercy of the market, which is why shorts got destroyed back in 1997 when they watched the NASDAQ bubble rise another 100% before collapsing.

There is only one assurance in investing and that is the herd always gets slaughtered.  Right now the herd has placed themselves 100% in bond funds right at the peak of the greatest bubble in history. It will not end well, and I hope that you not only get yourself out of the way but you take advantage of the profits that will occur on the downside collapse.